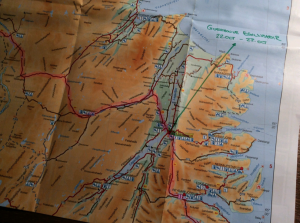 We were to leave the eastern part of Iceland today and head northeast towards Lake Myavtn.
I was worried about the road driving conditions, since it had been snowing throughout the night.
I have never driven in snow conditions, hence I wasn't sure how difficult the driving would be.
In my previous trips I've seen cars that had skidded to the side of the roads;
it wasn't a nice sight.
I certainly wouldn't want to be stuck in a car in the snow
in a remote snow-capped Highland area of this region! 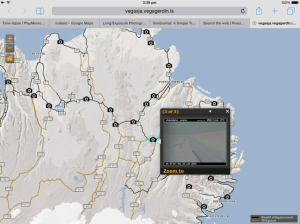 This was especially so when we would we driving through the heavy snow in the northwest highland area.
I checked the road conditions forecast from the official Iceland website
to see if the roads were passable.
It was fortunate that the road was still passable albeit slippery.
I decided that we should start driving early just in case
I had to drive at half the speed due to the road conditions.
Which turned out to be the case. 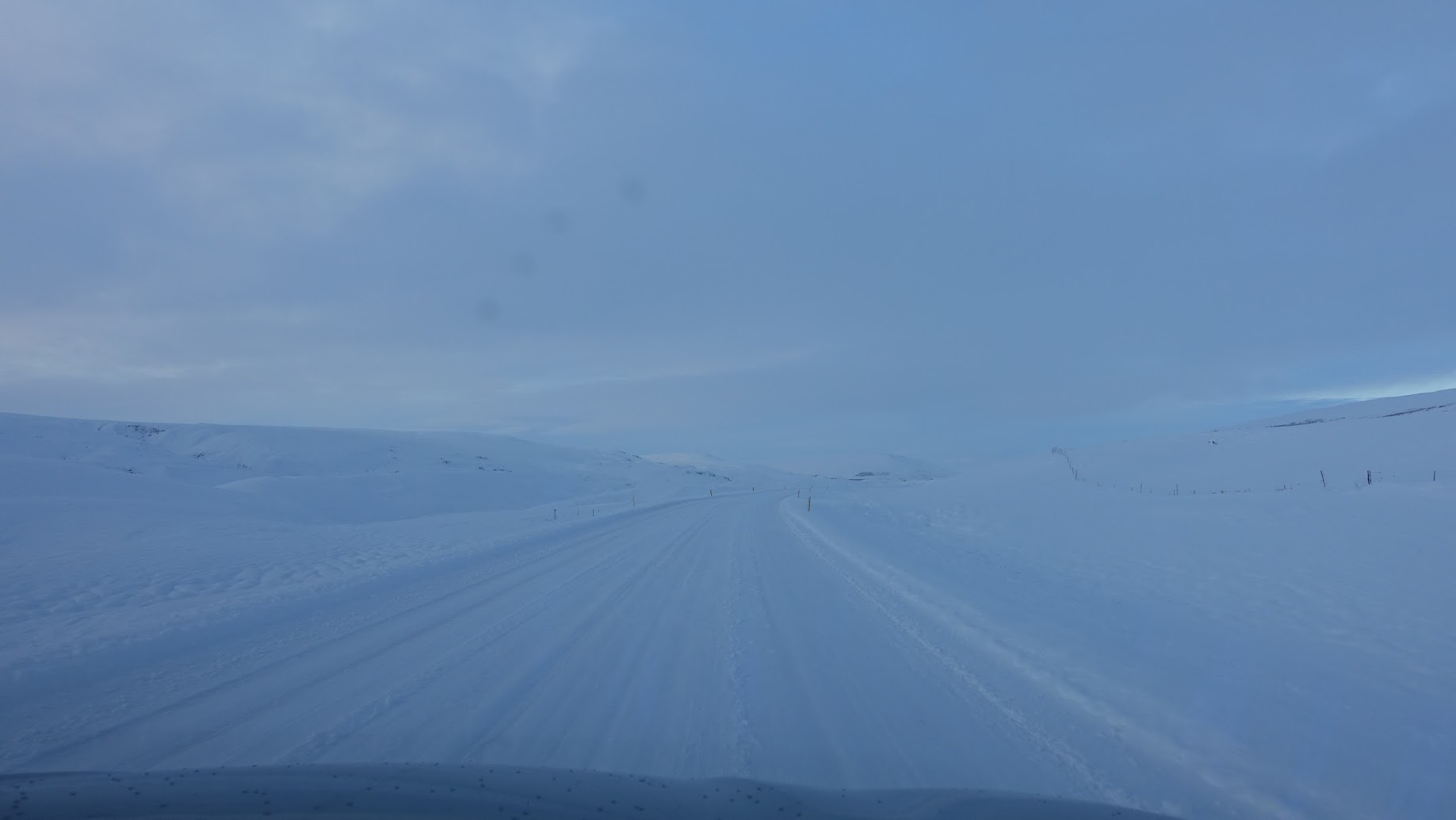 In fact the road conditions were so bad that at certain sections of the road,
the visibility was severely reduced.
The gusty wind blew up the new layer of of recently fallen snow,
and caused a snowstorm or snow fog.
The driving slowed to a crawl,
and it was unfortunate that there was a huge truck that was in front of us.
While it helped to create a reference point that I could easily follow,
it slowed us down tremendously.

We eventually reached the junction leading to Detifoss.
Located at Vatnajökull National Park,
this waterfall was said to be the most powerful waterfall in Europe. 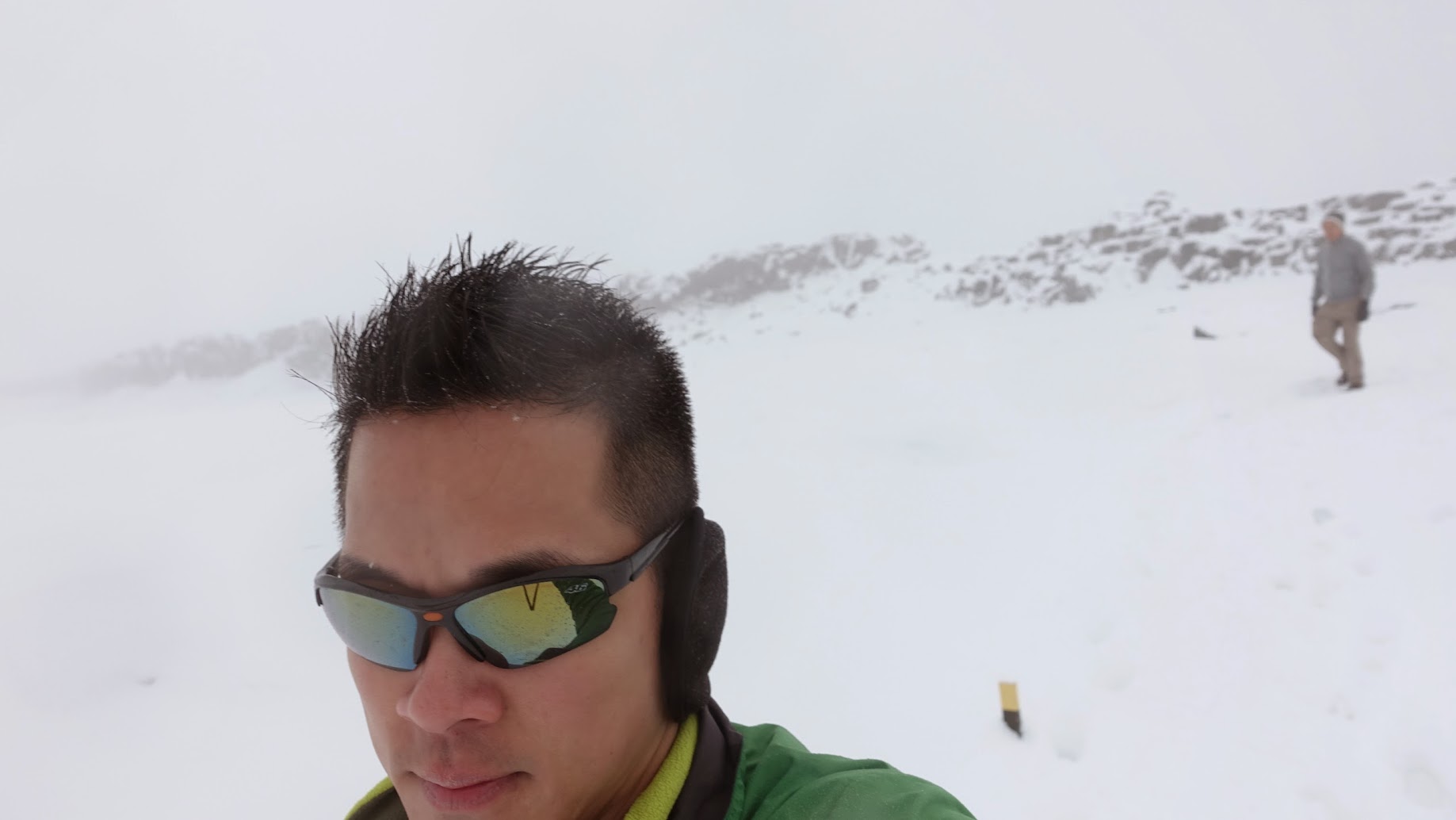 The road leading to the Detifoss was an unrecognizable snow-covered road
which would bring us 24km into the interior.
I was not sure if our Hyundai IX35 would be able to survive this difficult path,
but instead the sense of adventure prevailed,
and I drove carefully forward.
There were several times the tires slipped and I lost control of the car for a moment.
I had to resist stepping on the brakes, as this would cause the car to veer off the intended course.
I paid full attention to the drive, and after half an hour of full concentration,
we finally arrived at the Detifoss site.
It was then snowing so heavily that I could not even make out the designed space to park the car.
Using a tour coach as a reference point,
I decided to park diagonally behind the bus for easy identification. 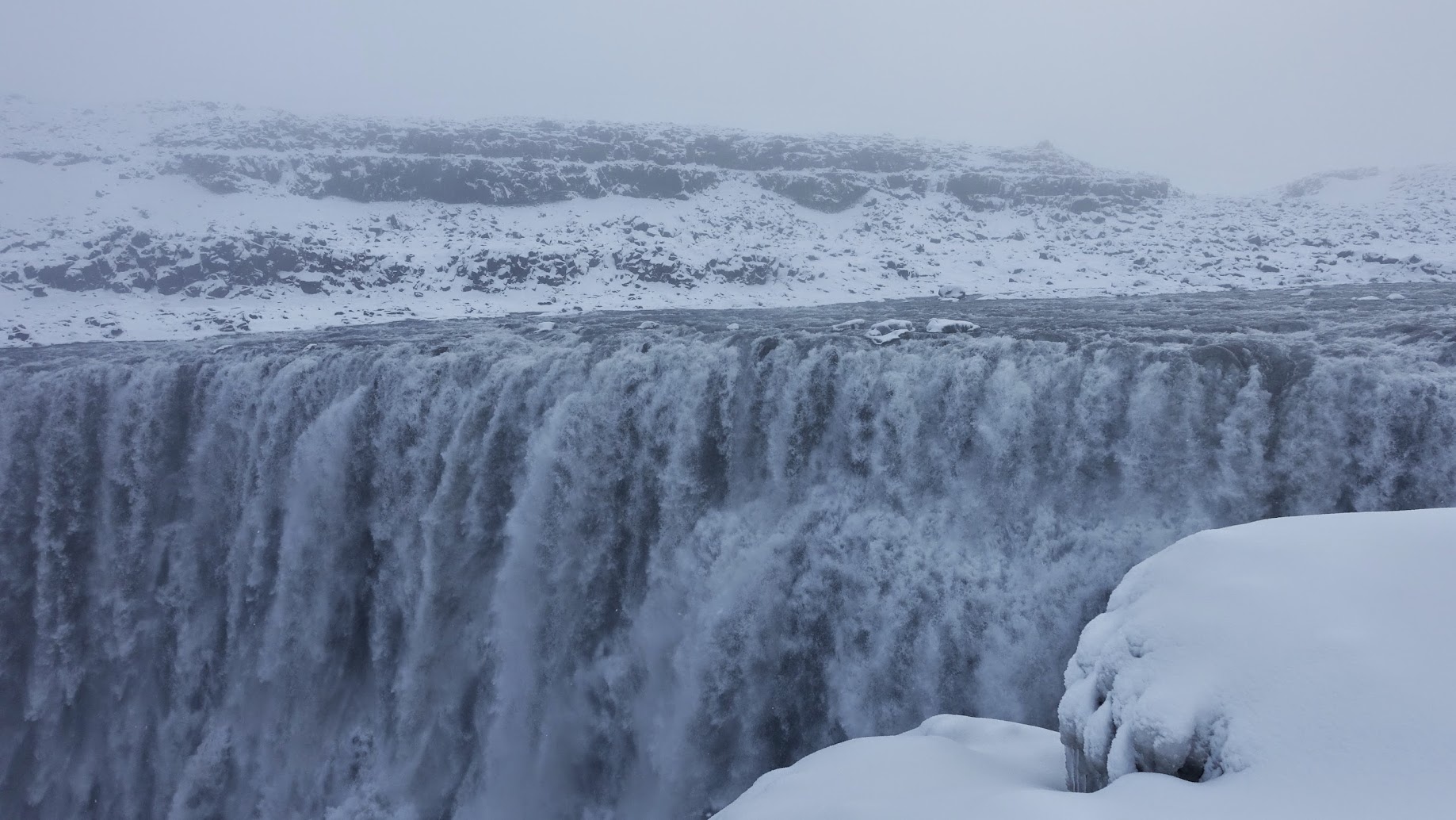 However, the journey to the waterfall was not over yet;
we had to do a light trek across the thick layer of snow,
about 800m away to reach the edge of the rift that overlooked the waterfall.
As there was still a long drive towards Lake Myvatn and then to Husavik,
there was little time to waste.
We rushed to the edge of the falls,
took several photos in the better cold, and then,
we were on our way again.

NB: By the way, Detifoss was where Promethus was filmed.

Husavik and the Psudeo Whale-Watching

We passed Myvatn and did not stop to look as we were almost out of time.
I was challenged to accelerate in order to reach Husavik in time,
yet I was honestly afraid that I would not be able to control the car
and get into a car accident.
This, together with the drive to Detifoss would be the toughest drive
that I have ever made in my life to date.
Thank goodness we arrived at Husavik in the nick of time without any accidents. 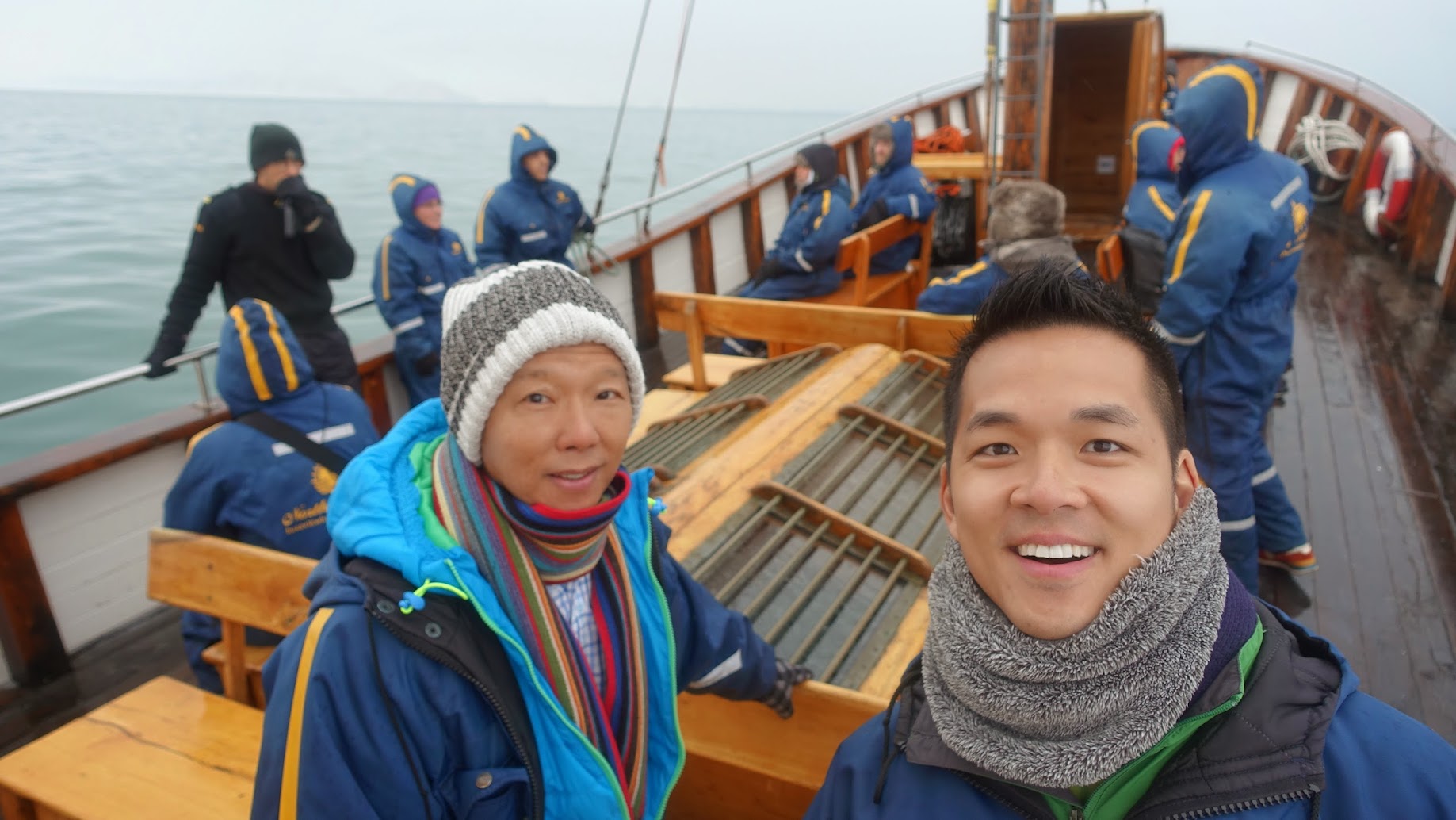 Husavik, on the eastern shore of Skjafandi Bay,
was considered the oldest settlement of Iceland, from 870 AD.
Considered to be the first place to be settled by a Norse man,
it was also the northern-most town of Iceland,
and likely the northern most part of a place I would visit for a while.

Ironically, the whale watching tour at the Arctic ocean north of Husavik
turned out to be the most disappointing part of the Iceland trip.
We did not see any whales, yet had to ensure over three hours of icy cold and ship rock.
It was almost like a scene taken out of "The Deadliest Catch" by Discovery Channel!!! 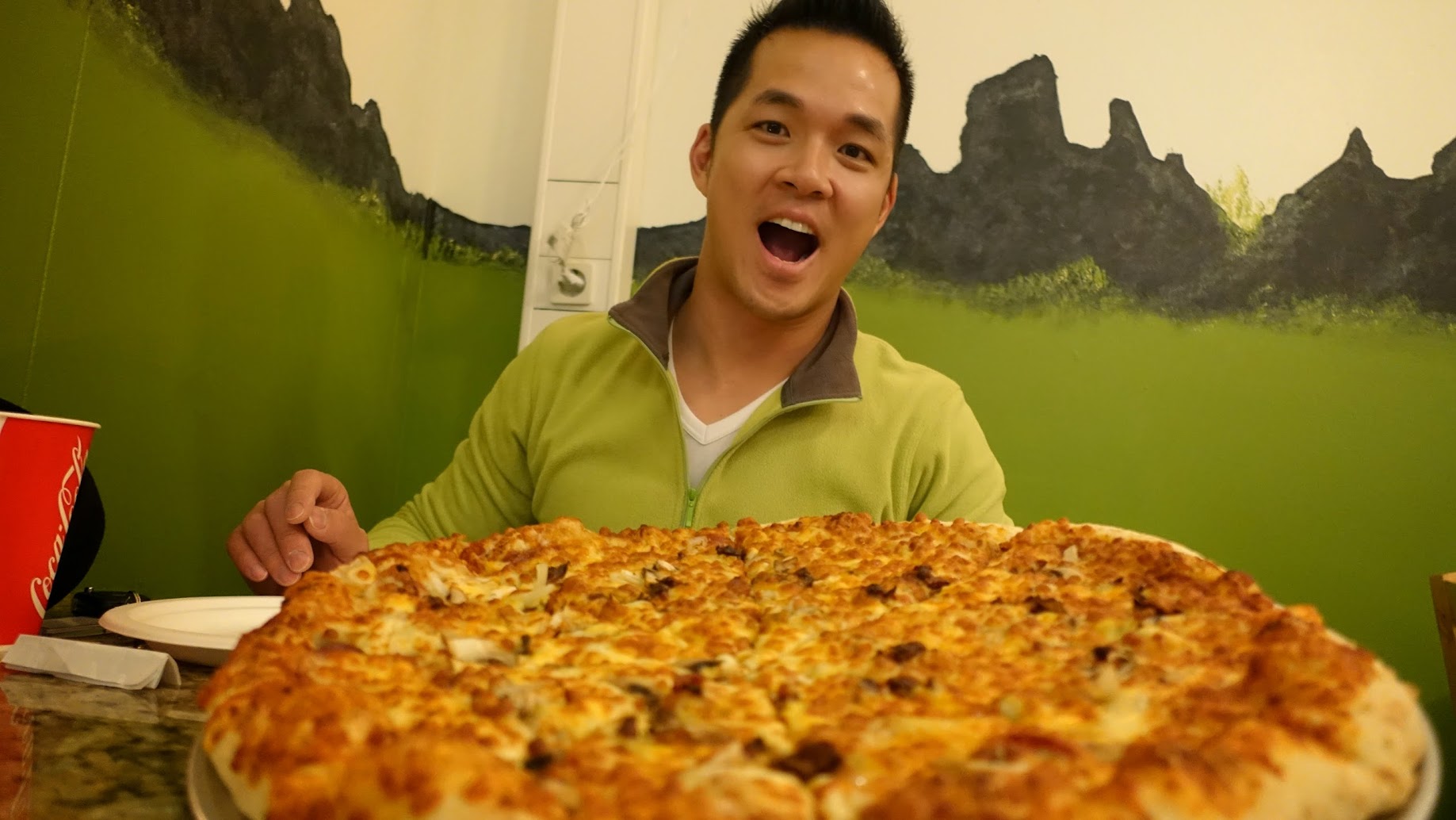 I was happy for the tour to end, and almost shivering,
I warmed the car seat electronically (very useful invention!)
and drove back to Myvatn.
We quickly checked in and then drove to a nearby
Daddi pizzeria for a filling pizza meal.