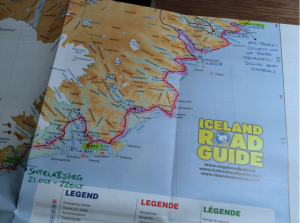 As the curtains were undrawn throughout the night, at seven in the morning,
I was roused from my sleep from the gradually brightening sky.
It was a dull morning of sorts, unlike the sunrise I saw at Guesthouse Vatnsholt a few days back.
There were no hues of blue or orange.
It was a coat of gray, signalling an overcast day.
Looking out of the window, I saw two lambs and the mother sheep,
grazing without a care about the world.
Intrigued, I opened the window and made "baaaa"sounds
to attract the attention of the lambs. 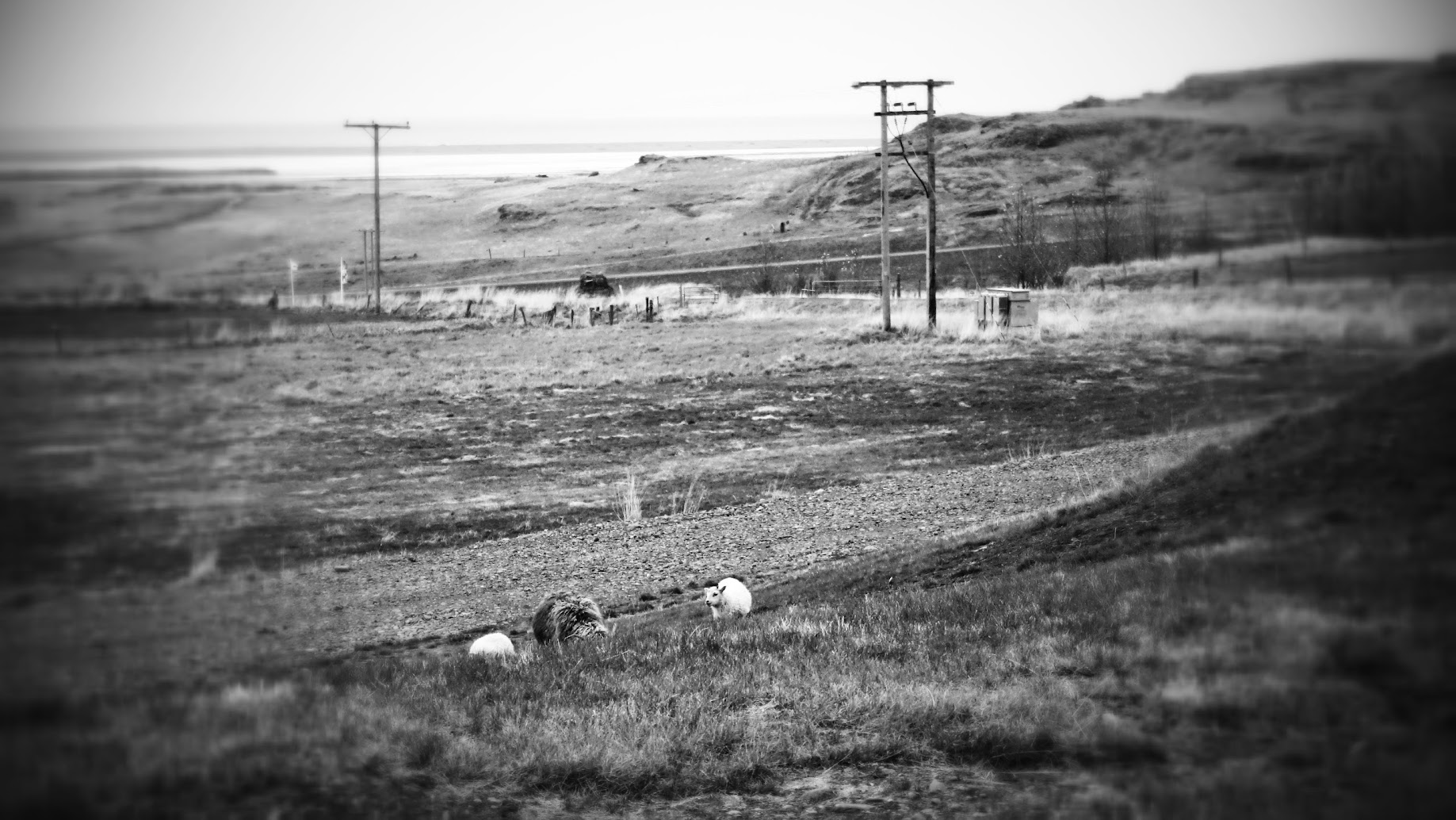 One of the lambs, curious with the sudden sheep-sound,
raised its head and peered at me.
The mother sheep, alerted by my presence, quickly got the lambs back to her side.
It was a simple and non-eventful encounter - myself, the sheep and her two lambs,
yet I was enthralled by the innocence of the lambs, and the fact that they were here,
at a remote part of Iceland, grazing in a cold and harsh environment,
and that I would probably never pass this way,
nor meet them ever in my life again

I decided not to disturb then any more,
and got ready to breakfast and check out.
It would be a relatively longer drive today. 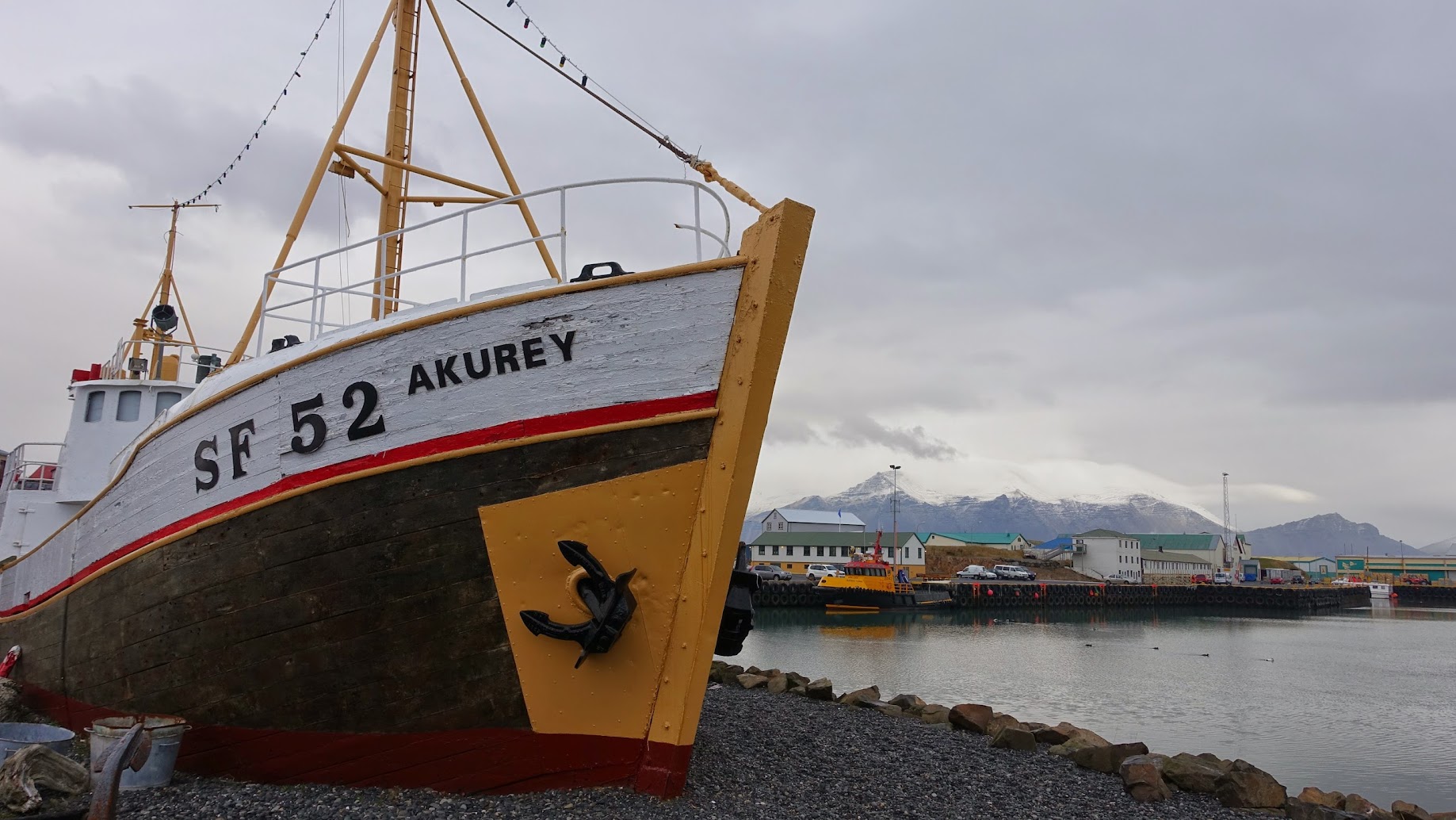 The first stop of the day was at Hofn, a small little port town.
We did not loitering too long in this cold, wet town, except to drive towards the port.
There was the grounded boat "Akurey", which made a nice looking symbol for the port area.
We drove to N1 (Gasoline Station) for a quick refuel and then we were in our way once more. 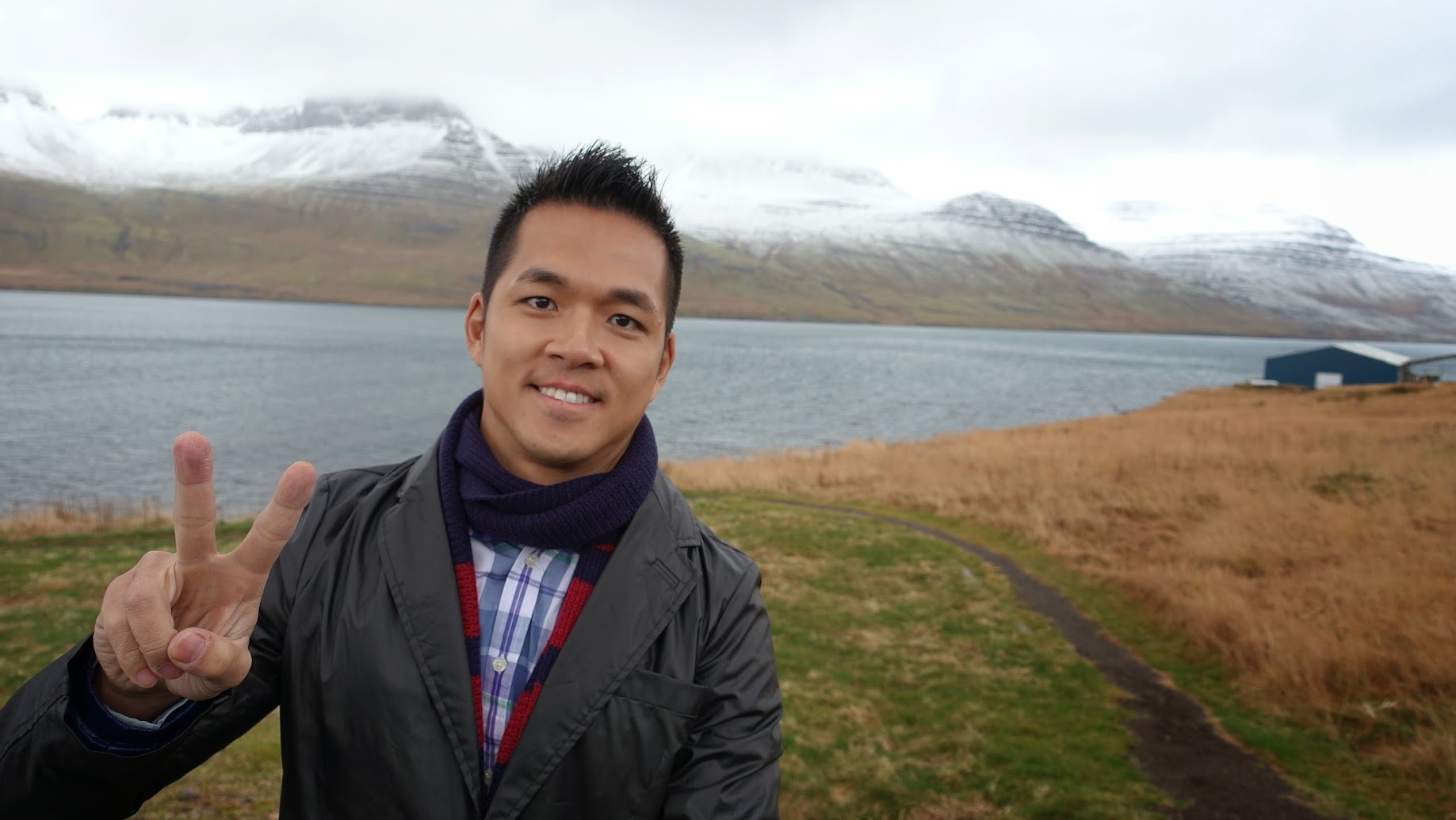 Since leaving Reykjavik, I have been driving eastwards.
The terrain was constantly changing, from the moss and lichen covered rock outcrops at Pingvellir,
to the scattered greenish boulders at the south coast.
Today, we were entering into a colder area, with snow-covered mountains flanking the road.
Totally breath-taking!
Some of this terrain were likely uniquely Icelandic and hence new to me.
I have driven in countries like New Zealand, the United States,
France, the United Kingdom, Taiwan and Makaysia
but never experienced anything like these before. 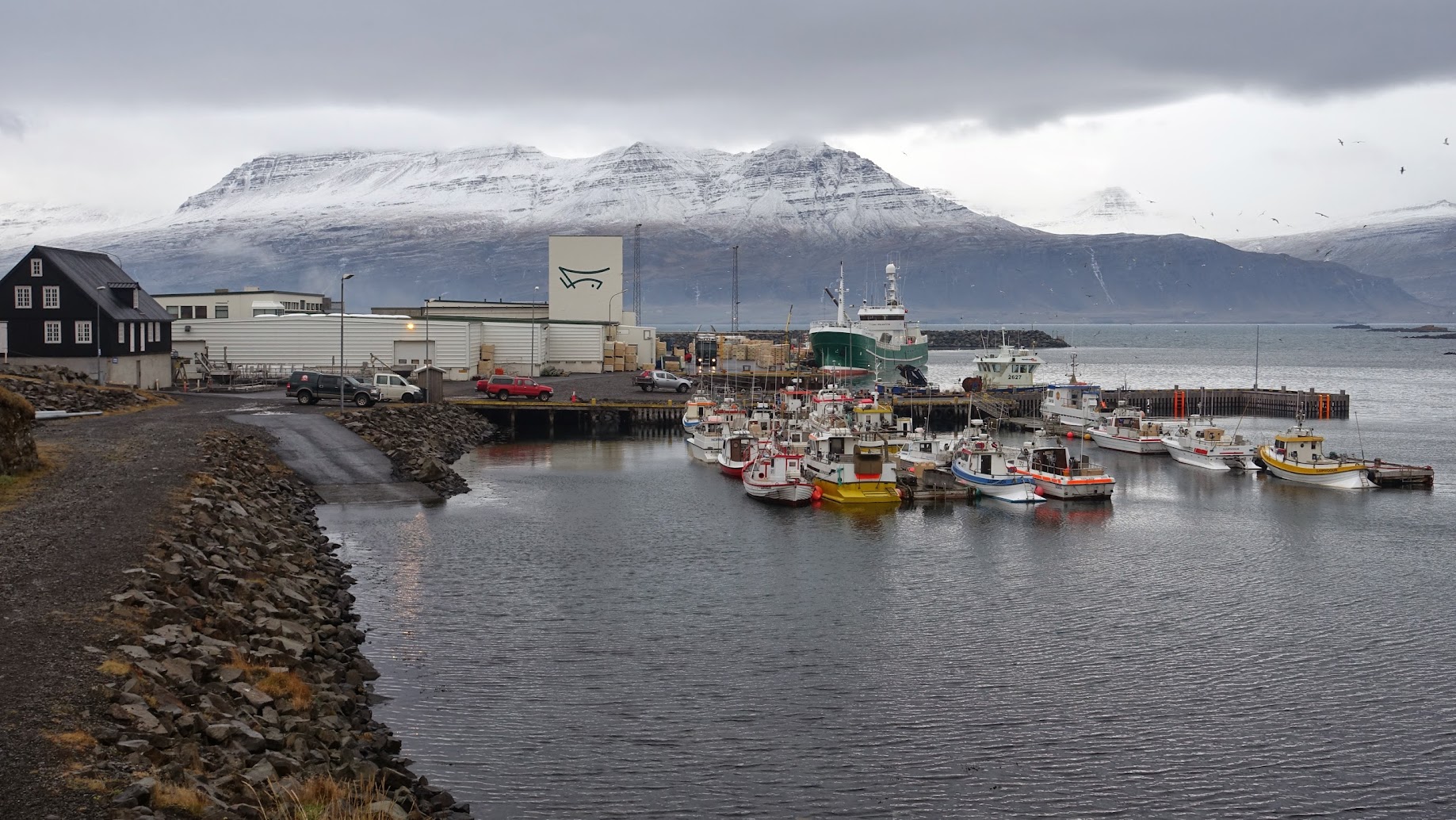 As the drive took us from the south coast to the eastern part of Iceland,
we were to pass through several fjords and some gigantic mountains.
Many of them have been severely weathered over time,
leaving an even trail of debris at the foot, which threatened to encroach onto
the paved road and block our right of passage.
We finally arrived Djupivogur, which was the halfway point for the day.
Djupivogur was a small fishing town located at eastern Iceland. 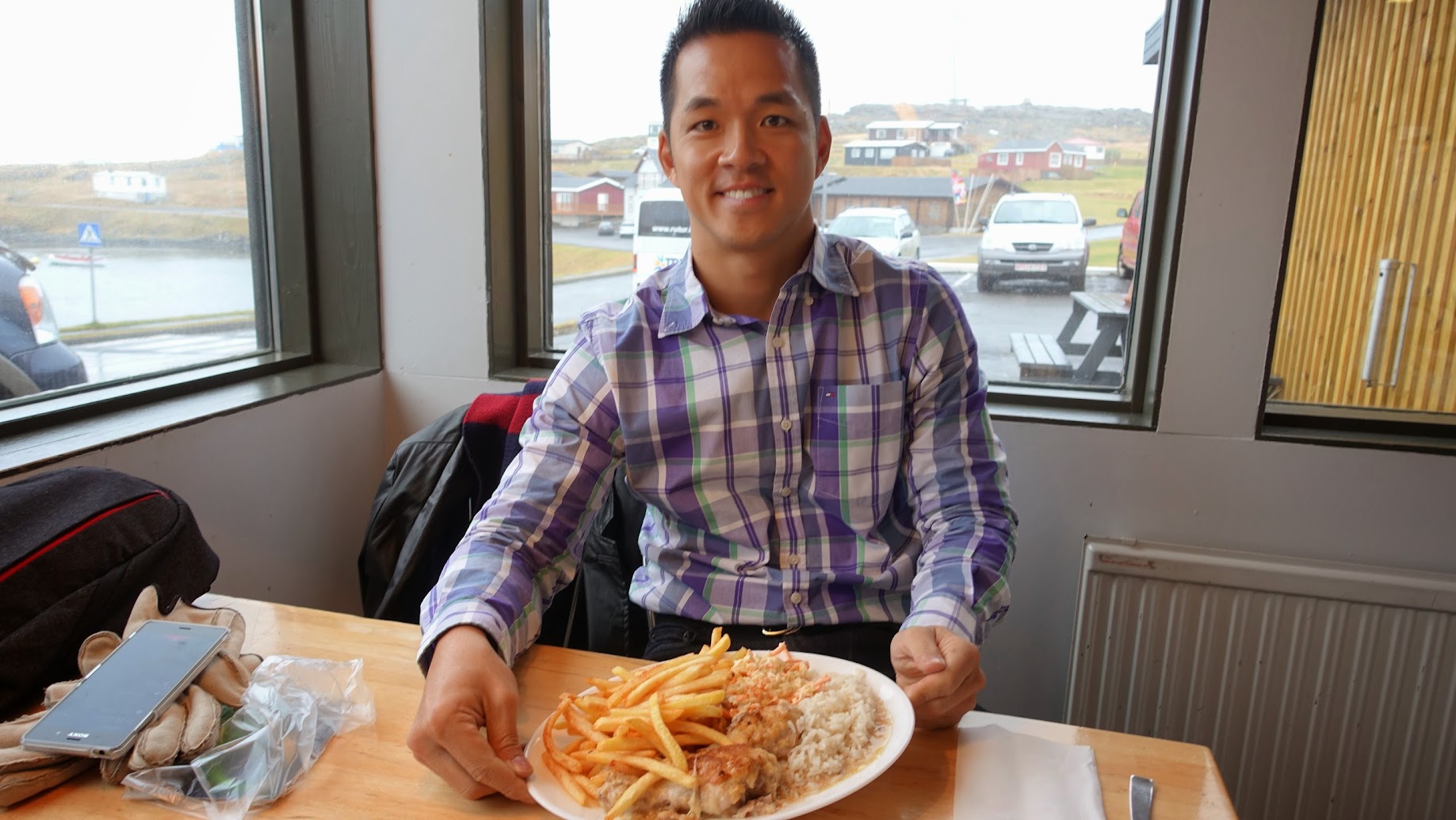 We drove to the pier and then returned to the town center.
I made a quick stop at the post office, then we had a delicious local lunch set of rice,
stewed chicken and fries at the local diner.
There was also a dessert made with either prunes or plums,
and we had to pour some milk over this sticky sweet paste. 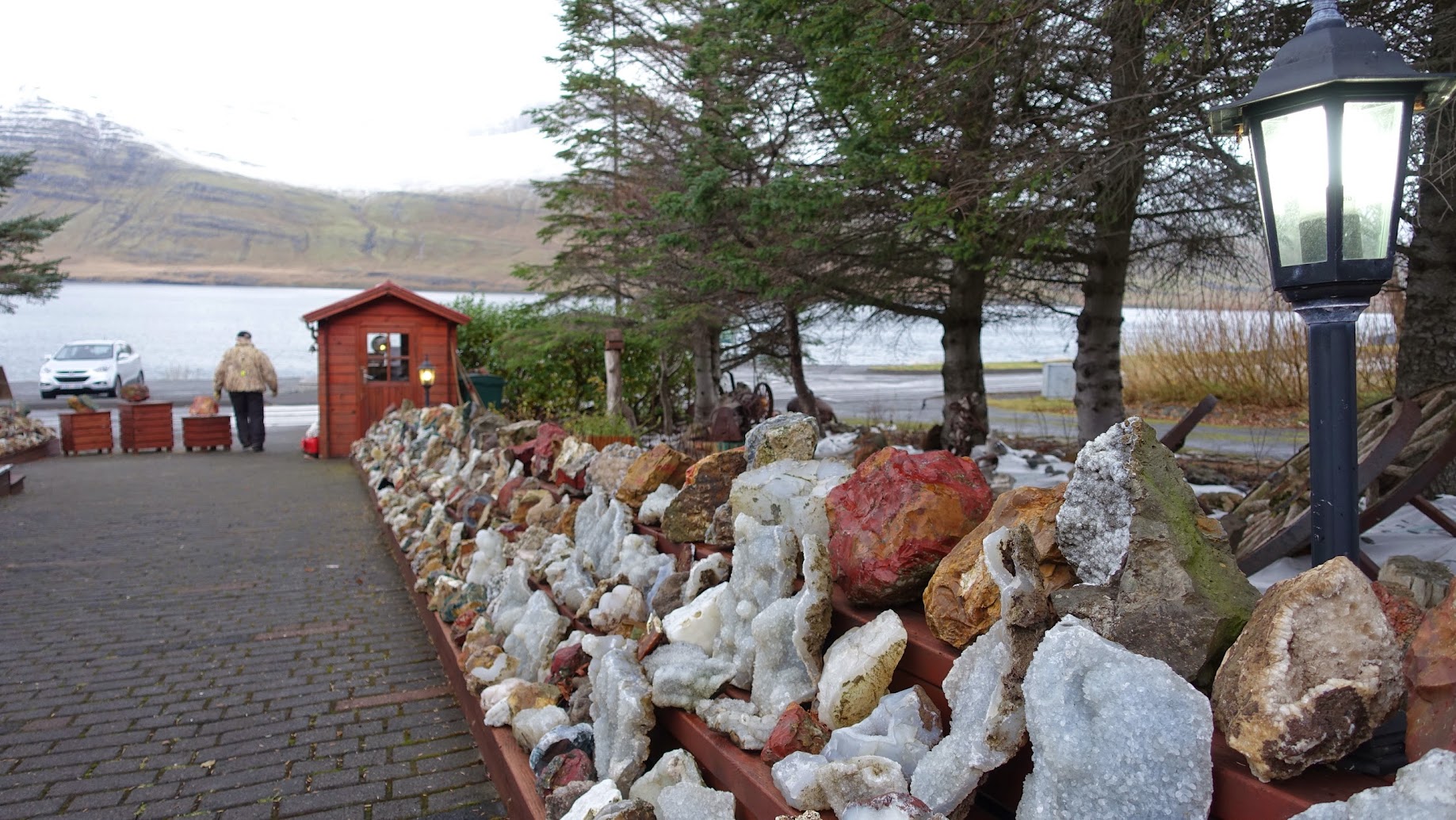 Supposedly the world's largest personal collection of rocks and stones,
the late Miss Petra went around various parts of Iceland to gather these stones.
There were jasper, obsidian, hematite, agate and many other metamorphic strains.
We paid the 1,000 Kronas entry fee for each and then
wandered around the Miss Petra's house where the stones were exhibited. 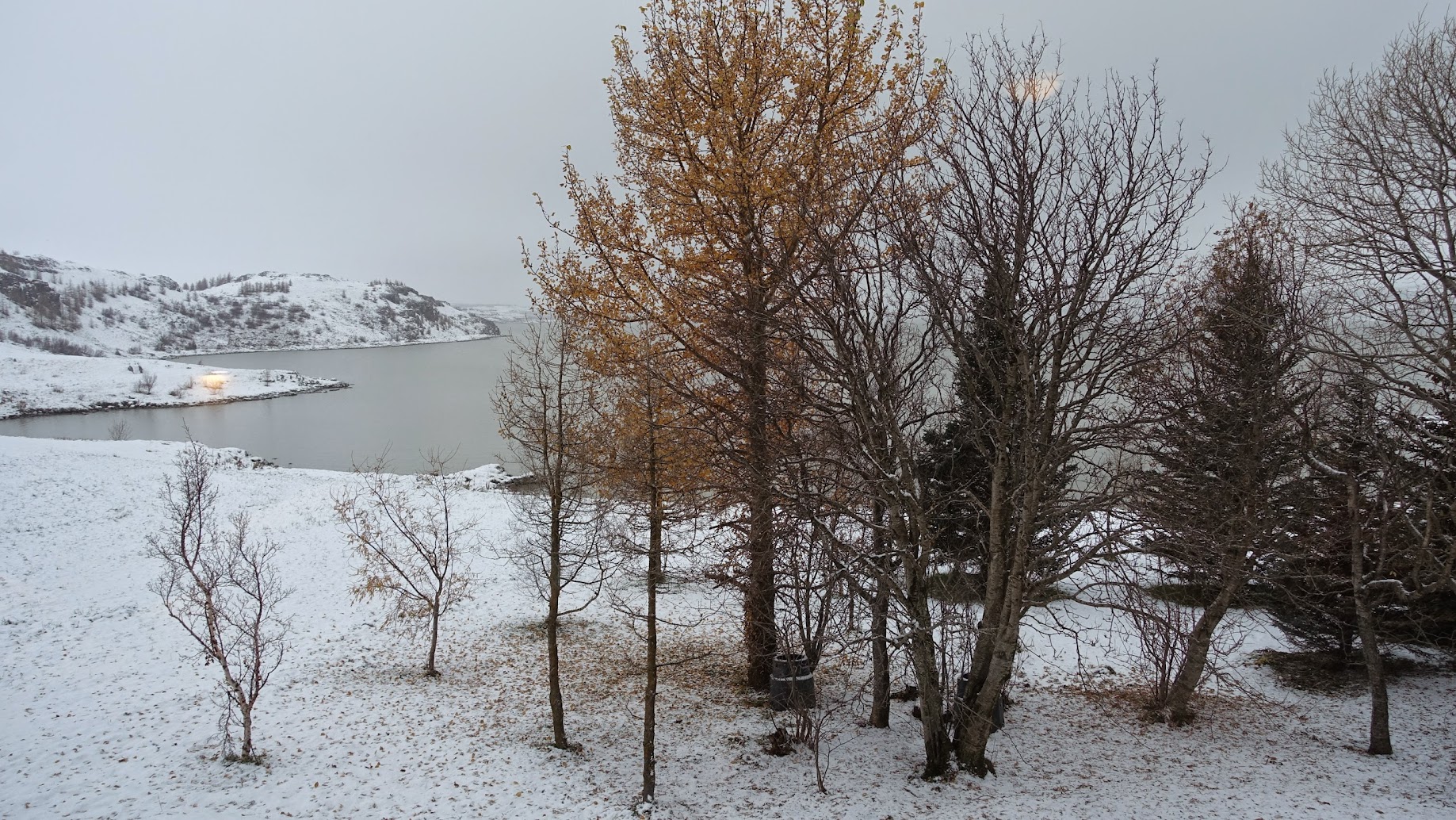 The temperature dropped sharply, and the coastal drive meandered into a snowy landscape.
In fact, the road that we drove on, became increasingly white,
and I had to be careful with my driving in case I lose control of the car due to the slippery conditions.
Fortunately, before night fell, we arrived at Egilssatõir, the largest eastern town of Iceland.
We stopped by at Bonus supermarket to ask for directions to the hotel,
and were pleasantly surprised by the really top-grade hotel.
The guesthouse was sited at the center of the town,
and it seemed that this recently-renovated guesthouse
occupied an interesting place in the history of the city. 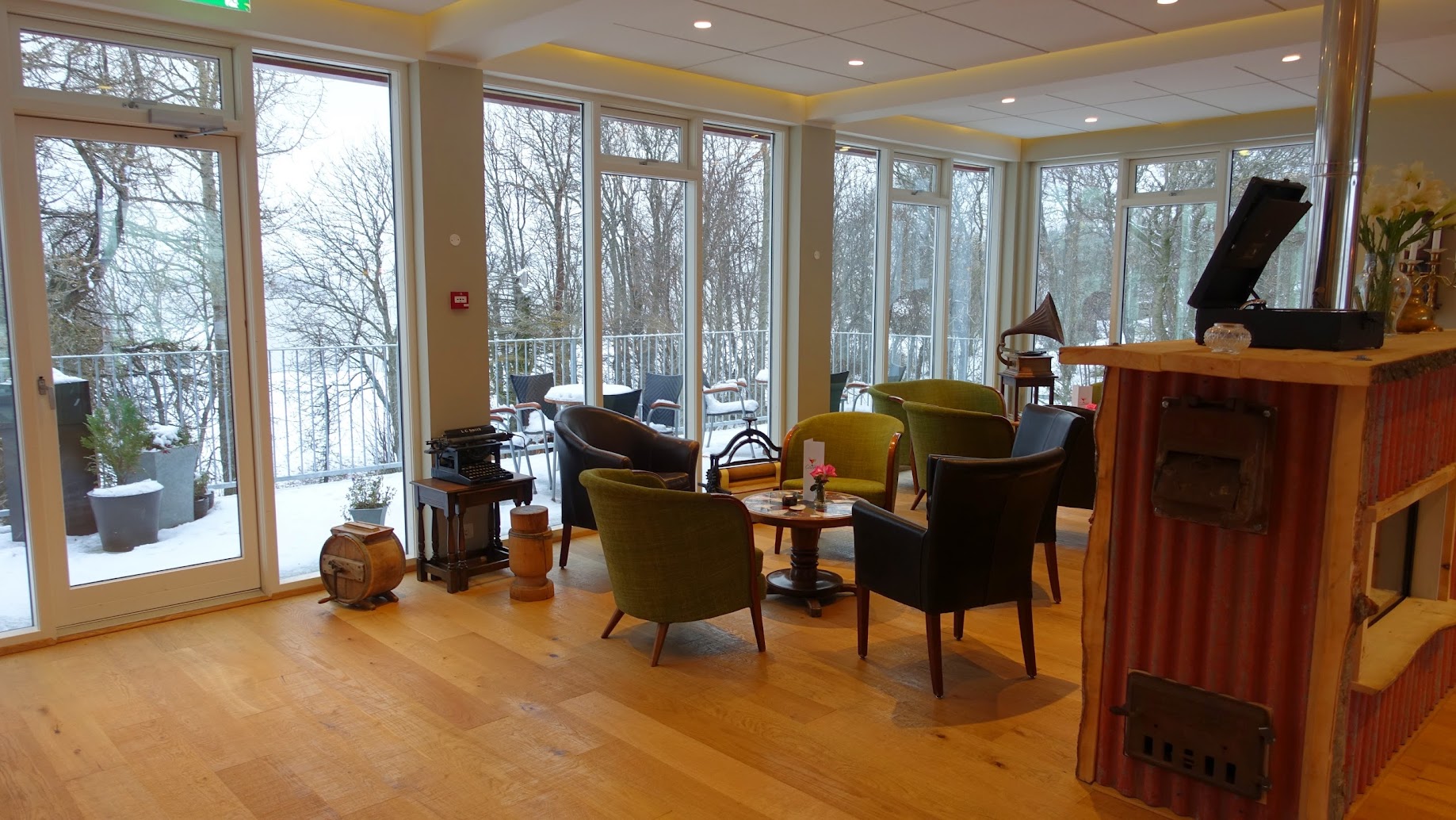 The farm Egilssatõir, which the much younger village on part of the farmland took its name from,
was located at the most frequented crossroads in East Iceland.
In earlier centuries poverty often made it difficult to accommodate all the visitors coming to the premises,
and in 1884, the resident was then forced to start charging for accommodation in the farmhouse.
This marked the beginning of Guesthouse Egilssatõir. 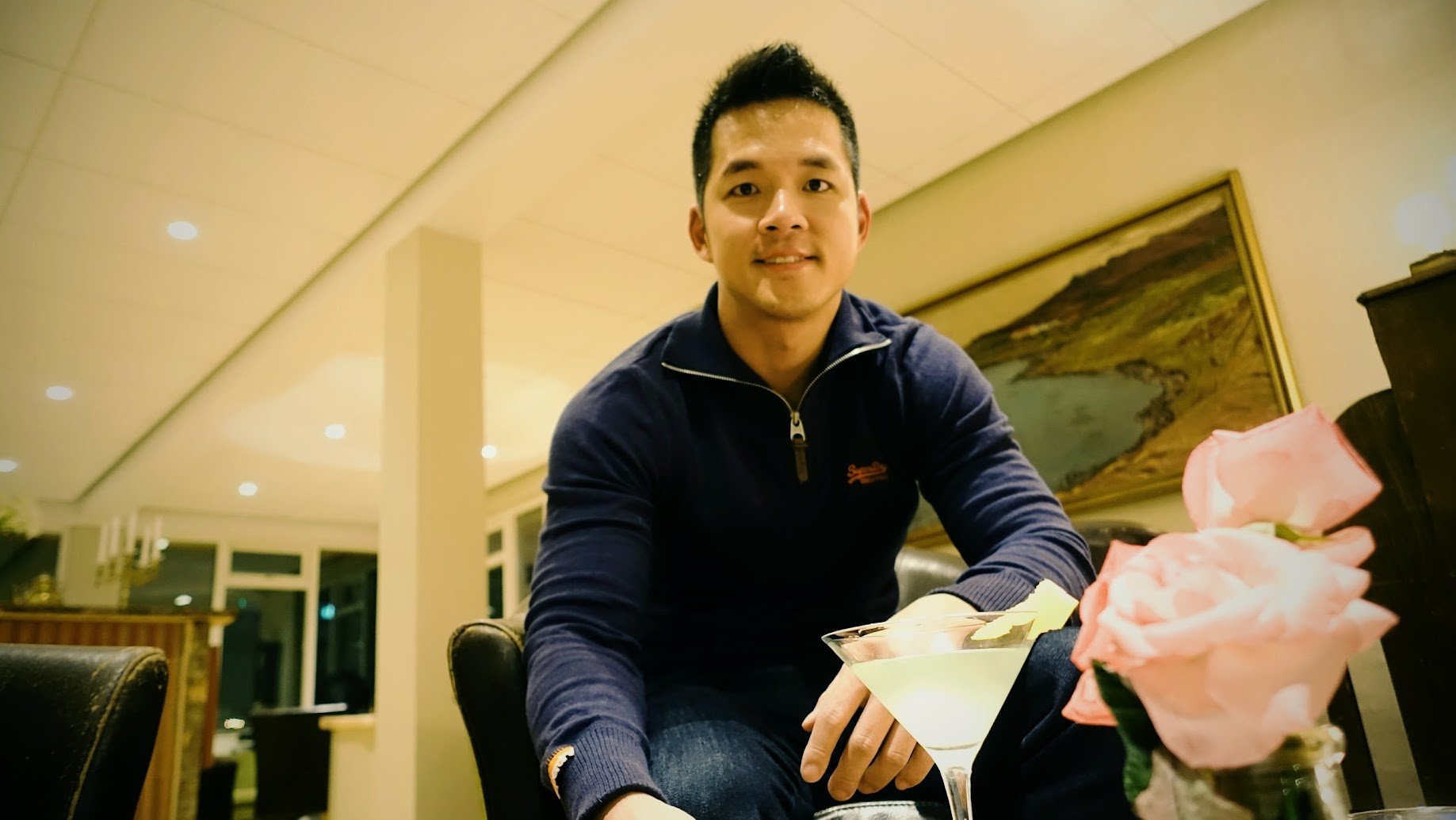 Weary from a long day of driving, I was really happy with the cosy
and warm interiors of the hotel room, as well as the hotel lobby.
In fact, I even made time for a nice Apple martini cocktail at the lobby area,
while heating myself up at the glassy fireplace,
while watching the furiously falling snow outside. 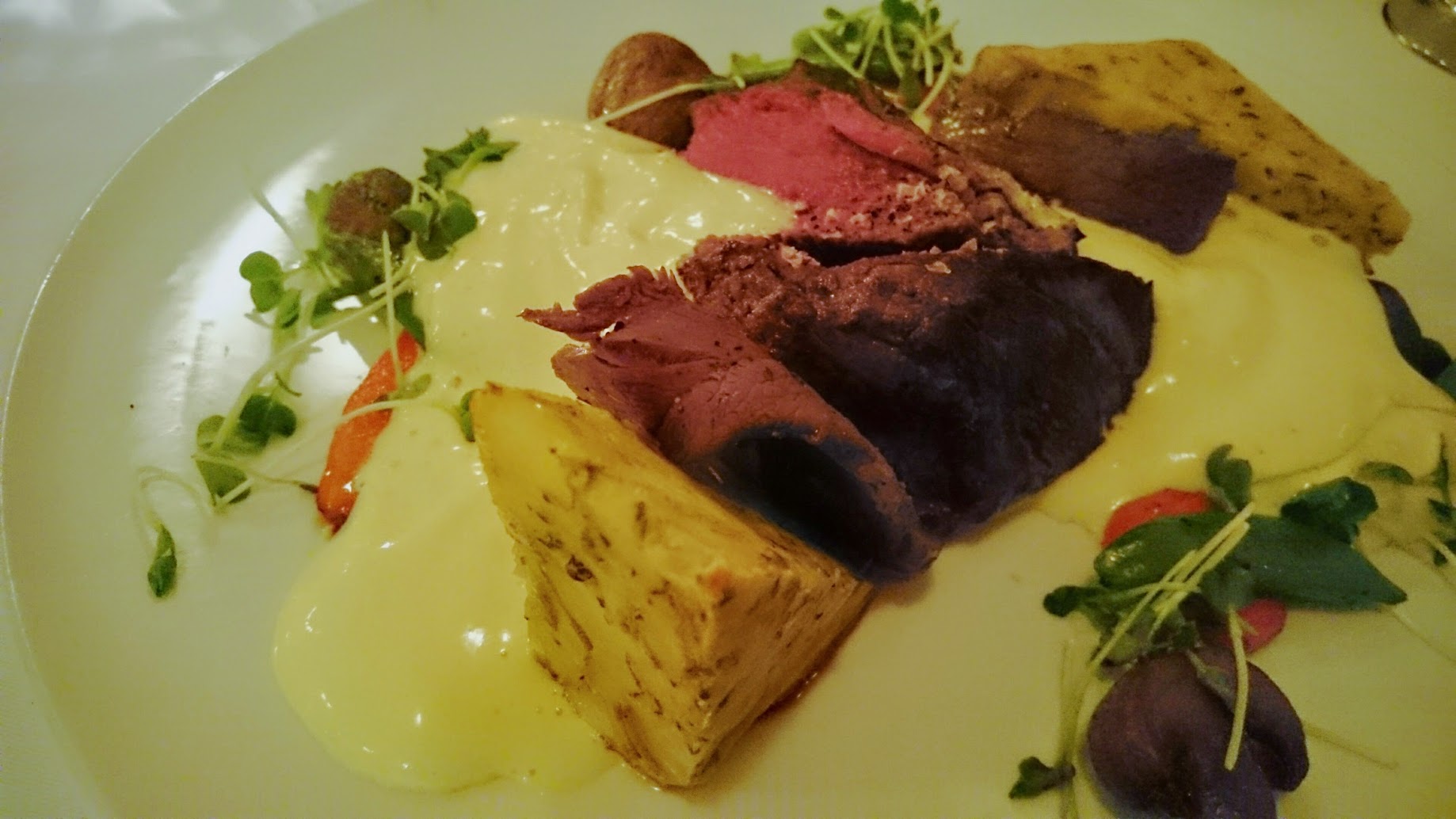 Dinner at the guesthouse was pricey but a fantastic affair.
Even the drinking water was delicious!
I had a good entree which I unfortunately can't remember (lol!),
but I remembered my lovely steak main course.

NB: Now, that I have completed the entire Iceland trip,
I would say that the meal here was one of the best meals of the trip.

After the satisfying meal, we got back into the room,
and I continued with the detailing of my travel journey.
It was definitely taking me quite a bit of time to put everything down into words,
but I am sure that at the end of the day,
it would be well worth it.