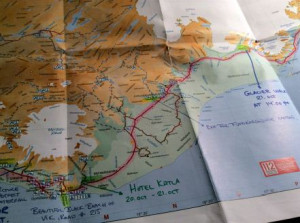 .
At Guesthouse Kalta, I woke up again, before the break of dawn.
Still jet-lagged, I eased myself from my light slumber, and made good use of the
strong WiFi signal to check my emails.
. 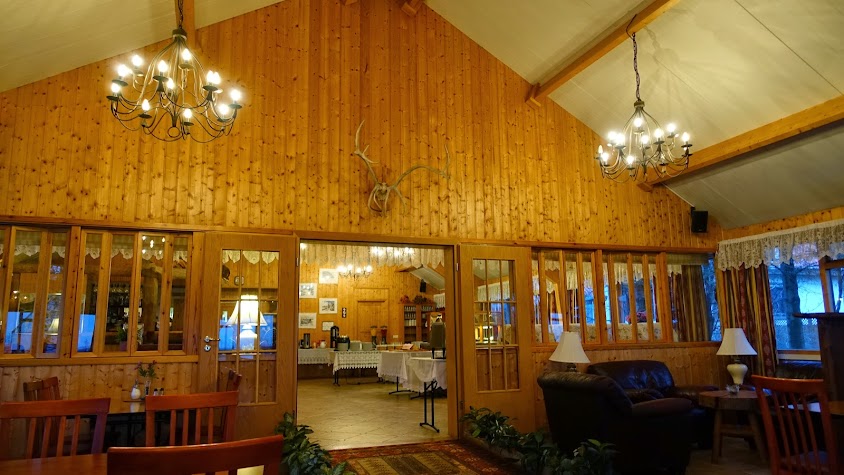 .
I then started the day with a thirty-minute Pilates workout that I referenced from YouTube.
I reckoned that a little core exercise would do more good then harm.
And Pilates, while seemingly easy, often gave a good sweaty workout.
After Pilates, I had a quick warm shower, then we got changed and headed for breakfast.
The dining area at Hotel Katla was designed like a Viking hall of sorts.
It had a pronounced V-shaped ceiling that rose high up,
and the pine interior together with the incandescent lighting gave the hall a warm and cozy vibe.
Particularly impressed with the waffle machine, I made a few lovely waffles and coated
them with the chocolate spread. 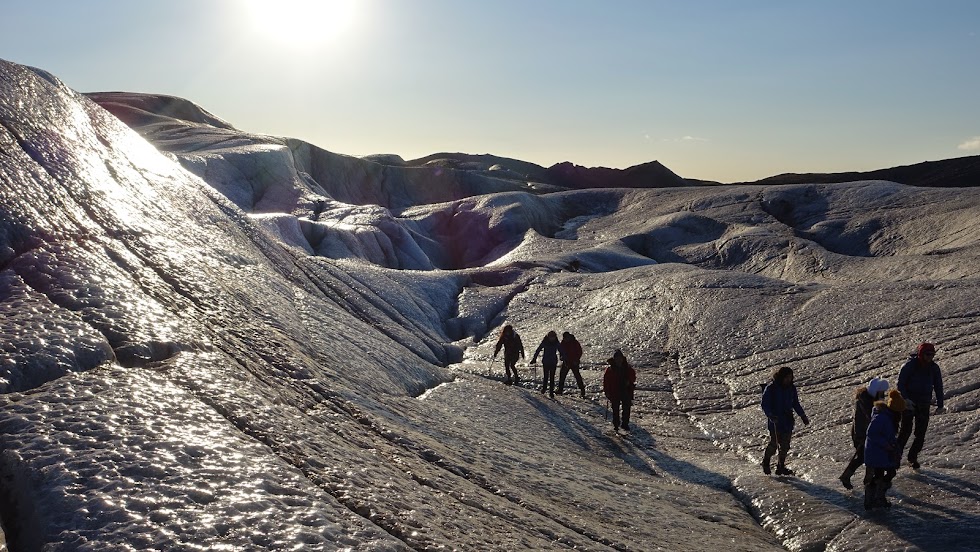 .
Arriving a little early for the glacier walk, we drove further eastward to find a
Cafe for lunch and WiFi. Then it was back to Skaftafell area to put on our crampons
and board the city van which would fetch us to the edge of the glacier.
It was our first time using crampons, and it did feel a little awkward initially,
as it required us to walk in a penguin-like swagger. The glacier
was really a thick tongue of Iceland, and the surface layer was obviously slippery,
having the top-most layer constantly melted away by the sun yet solidifying yet again
by the cold frosty winds. It was one step at a time, one foot in front of the other.

The uneven surface of the glacier caught the sheen of the sun and bounced its rays in various angles.
This, coupled by the clear blue, cloudless skies, presented to me another new landscape, something
refreshing, awesome, and yet fragile. 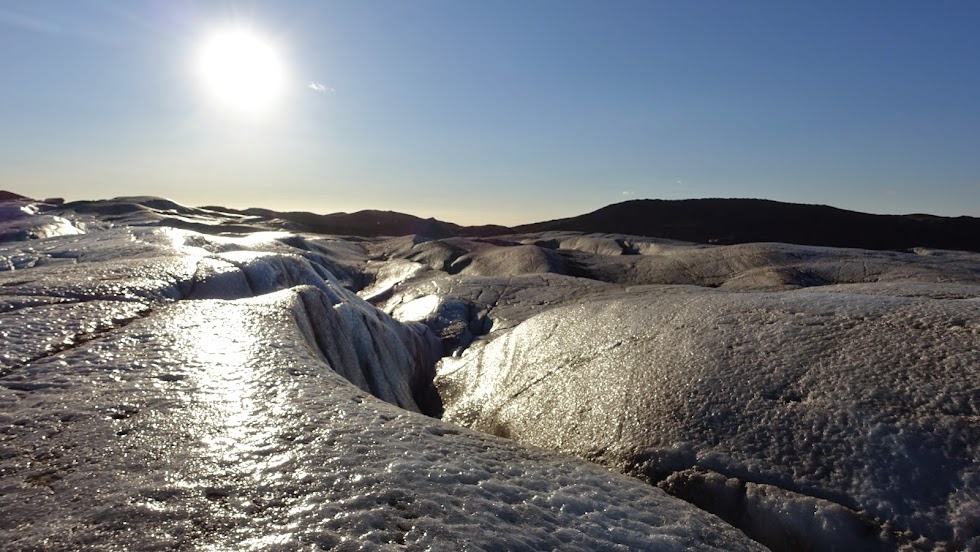 .
Why fragile? This was because this glacier, just like many other glaciers around the world,
was retreating everyday. As they shrink and grow smaller, there was no doubt that it would
contribute to the slow but definitely occurring global warming.
Hence, nature, as conceptual as it might sound, was an organic form that constantly interacted with us.
Nature was especially personified by Iceland, where we could see glaciers, volcanoes,
and the most diverse environment possible.
I personally preferred the snowmobile tour over to the glacier walk.
This was because, while the snowmobile was action-packed, the glacier walk was more muted.
The silence in itself was not a bad thing as long as one took this opportunity to think,
but there was more adventure in the snowmobile one.
Thinking. Something which could be a luxury these days, when we are bombarded by various
social media channels that scream for our attention.
Capturing the Northern Lights 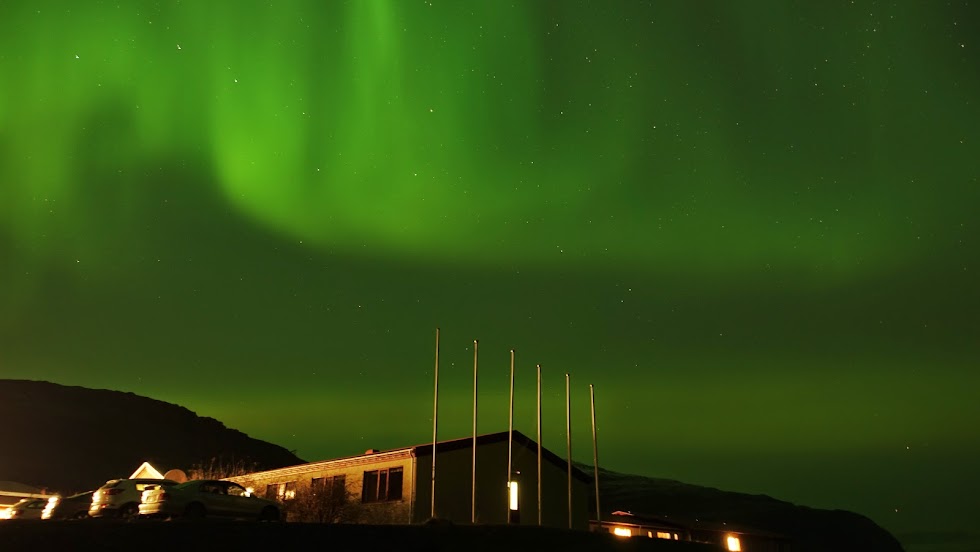 .
I did not forget that my main reason for making the trip was to catch the Northern Lights.
Hence, in the evening, as I was checking in at Hotel Smyrlabjorg, a medium-sized facility in an
isolated part of the Route 1, my first eager question to the receptionist was,
"Are there any chances of catching the Northern Lights tonight?"
She gave me a wry smile and then typed loudly on her keyboard, reminding me immediately
of the travel agency lady scene from Little Britain. She then turned her head up, adjusted her
glasses on her nose, then smiled,
"In fact, you might just be lucky; we have clear skies tonight from 7 to 9pm."
With raised hopes, we schemed to grab a quick dinner at the hotel,
then drive to a remote corner of the hotel compound where we could be
shielded from the bright lights of the hotel.
Dinner was a trio of meat selection (cured lamb, cured goose, ox tongue and sausage of lamb),
lobster tails, and hamburger and fries. I was won over by the extremely well-marinated
lobster tails, even though the portions felt a little too small despite their hefty price tags.
This was Iceland after all!
Fortunately, luck was on our side.

Within minutes of reaching our secluded spot, I spotted a faint glow over the horizon;
initially I couldn't determine whether it was just a large horizontal cloud - it was lackluster.
Then, much to my amazement, it morphed into a shimmering orange-green phenomenon.
Rushing out of the car into the cold darkness, I fumbled, trying to
attach my Sony RX100M3 onto the tripod, while tapping on the side window of our rental car
to catch M's attention and beckon him to get out of the car.
This was the moment I have been waiting for.
In fact, my investment in the trip: the camera, the tripod, and the time lapse application,
and my hours of reading up about the Aurora borealis was to prepare for this moment.
Excited with seeing the thin wavy hues with my naked eyes,
I clumsily fiddled around with the camera controls; was it supposed to be Shutter Priority mode?
If so, would 30 seconds do?

In the midst of my panicking, the Aurora disappeared.
I did not manage to take a shot of this beautiful light.
Then, seconds later, several green hues appeared over the horizon of the Guesthouse.
I was more prepared this time round and managed to capture several instances of the Northern Lights .
n fact, I stood and stared at the play of lights across the star-lit skies.
It was amazing! While the camera captured the lights, nothing beats seeing it in person.
It felt surreal and transient - like this journey, and this life of mine;
shimmering and shining for a brief moment and then fading into nothingness once more.
Yet it was not meant to be a sad affair,  but an appreciation that all things good (and bad) will come and pass.

The transitory nature of the moment.
I remember reading up on some ancient folklore about the lights - that they represent the
souls of those who have just departed from Earth. They shine for one last time as the Aurora,
and then join the distant stars, existing indefinitely in the galaxy, watching over the earth,
watching over us.
I was reaching the end of my thirties in a couple of years then would become a fortysomething person.
Definitely moving past the prime of life into a new phase of life.
What would define me in this new phase for my life?
If a person in his twenties was looking at growing his career and wealth as his future,
and journeying towards excellence,
a person in his forties would still be journeying, but perhaps experiencing life and also smelling the roses.
Perhaps also being confronted by the basic reason of Raison d'être :
why do I exist, and for
what do I exist for?
Strangely, Madonna's song which was popular some moons back:
"American Dream"
came to mind.
"I tried to stay ahead
I tried to stay on top
I tried to play the part
But somehow I forgot
Just what I did it for
And why I wanted more
This type of modern life - is it for me?
This type of modern life - is it for free?"
Like the poignant lyrics, it would take some time and some thinking to realize that
nothing was really what it seemed. We were influenced heavily by the pop culture,
social media as well as the friends and people around us.
Almost like "keeping up with the Jones," or
"doing better than the Jones." -
there was a pressure to do and live better than the mean and the median group,
but yet this determination was usually measured in material terms of how much one earned,
how big was one's house and one's car.
I was cognizant of the fact that without the moola I would not have been able to make this
Iceland trip at all, hence it is a fallacy to assume that one would be happy without any savings
or income. But my point is a simple one. One's happiness was probably defined by
experiences, and experiences are formed by one's interaction with the world out there
(hence traveling to different parts of the world was essential to broaden one's perspective of the
world, and hence, life at large). But this was not enough.

One should also engage in a process of retrospection juxtaposed with introspection;
to muse, to ponder, and to contemplate, and to think.
The important question is not, what will yield to man a few scattered pleasures, but what will
render his life happy on the whole amount. 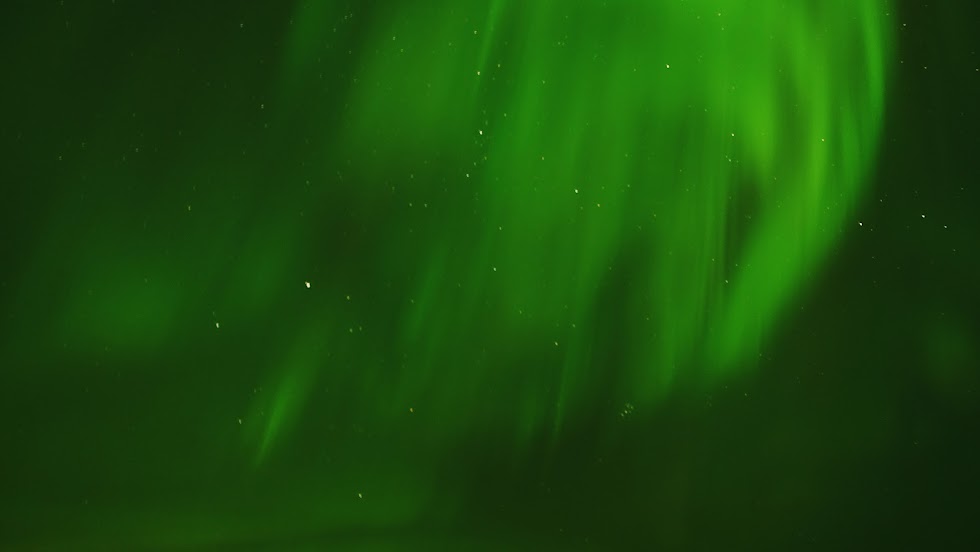 .
I took several time lapse shot of the Aurora with my Sony digital camera.
And then the phenomenon was over. We waited for another hour in the car,
sheltered from the biting cold, and sat on our numb fingers in order to warm them.
The dazzling spectacle did not return.

We decided it was enough for the night, and return to the nearby guesthouse.
Of course, I had to do my customary Instagram posting of the Northern Lights at the lounge
(where WiFi access was stronger), before calling it a night. We were still affected by the
effects of jet-lag, and by 11pm I was already in la la land.
Tags: aurora, travel
Subscribe