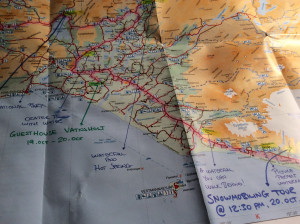 .
At Guesthouse Vatnsholt, I woke up before the break of dawn.
Still jet-lagged, I eased myself from my light slumber,
washed up and decided to take a peek outside our cabin. The
Guesthouse was surrounded by farmland and grazing ground for the farm horses.
There was a half-dozen lake nearby, which reflected the brightening skies in a
myriad of blue orange hues.
. 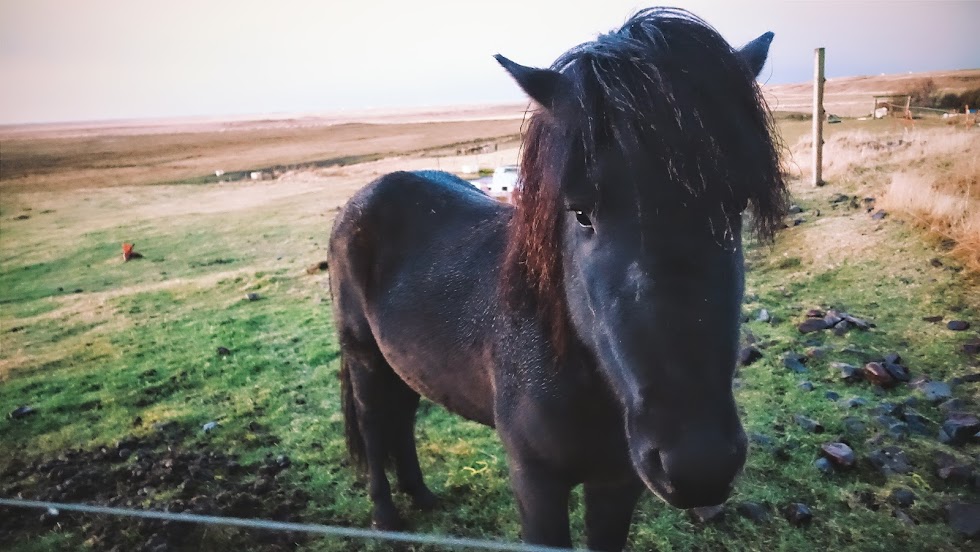 .
A black horse noticed my presence and trotted over towards me.
It was a short moment of peace, with me and the horse, and no one else around;
the only other movement was made by a tattered plastic sheet
which was supposed to cover a broken window of a nearby shed,
now flapping furiously in the chilly breeze.
Breakfast was at the main hall, which was located in the main building.
The muddy unpaved tracks encouraged us to drive over to the hall instead of
getting our shoes dirty from walking.

The buffet spread included what I have come to accept as typical Icelandic fare:
a variety of breads, hams, cornflakes, juices, cheeses, and
tomatoes, cucumbers and hard boiled eggs.
In addition there was a bowl of preserved herrings, soaked in a sweet pickle, and a tub of "caviar".
I squeezed this toothpaste-looking tub and out came some orangey paste,
which was probably some kind of fish roe. 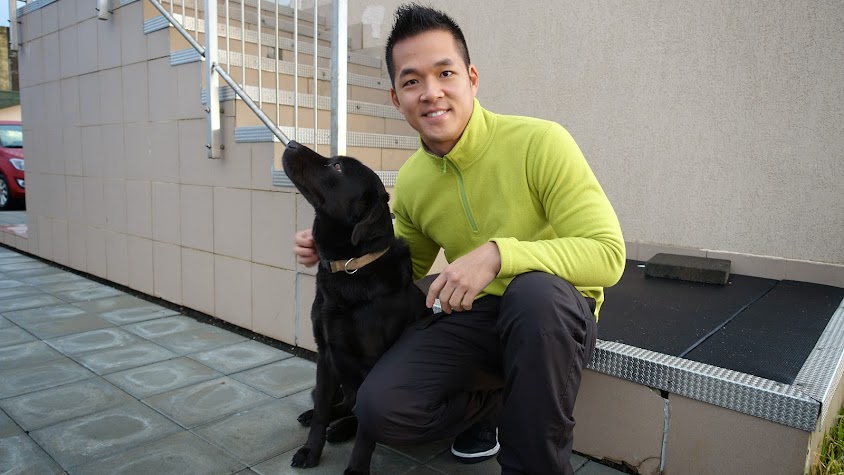 .
We did not take too long to finish our breakfast, as there was a long day ahead of us,
and we wanted enough time to stop at certain points of interest along the way.
Just as we were about to leave, an adorable black Labrador ran towards the car,
and wanted to play. We snapped a few more photos of the cute dog, and of
the picturesque landscape, and off we went. 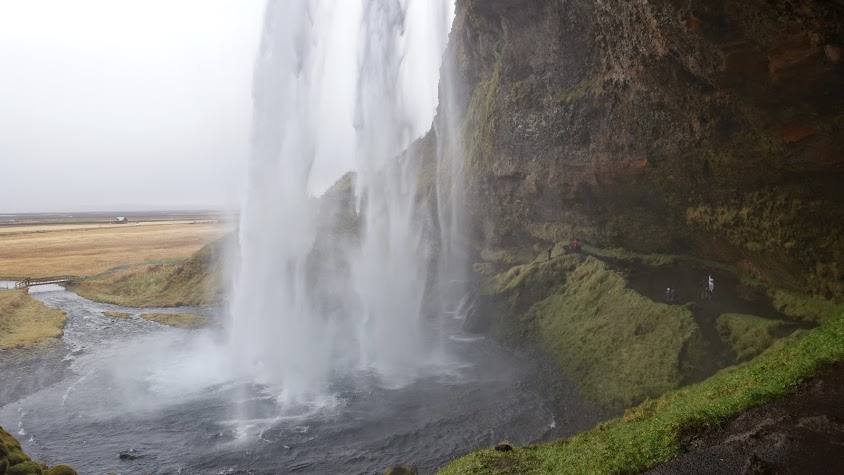 .
We left the Hvolsvollur area and headed towards the Seljalandfoss Waterfall.
The waterfall was unique in the sense that we could actually walk around the fall.
It was drizzling and coupled with the spray of the waterfall,
it created a layer of moisture on the camera lens which
made good photo-taking extremely difficult. In any case, I took time to marvel at this
impressive volume of descending water, and naturally walked around the fall too,
careful not to slip. 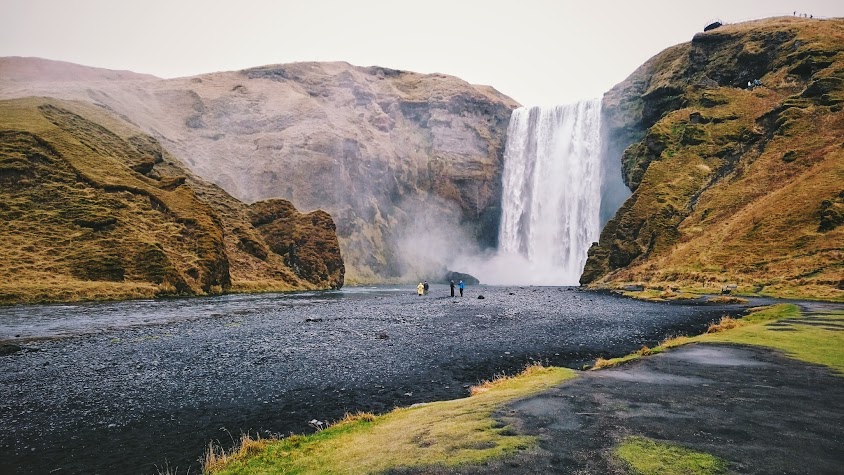 .
The next stop was another waterfall, called the Skogafoss.
After the wet experience in the earlier waterfall, we decided to have a quick one at this stop
and then headed for lunch nearby. It was a magnificent waterfall nevertheless,
but as we were already running slightlylate for our snowmobile tour
we decided to quicken our pace.
Snowmobile Tour at Myrlasjokull Glacier

We arrived at the booking center and waited for half an hour for the tour operator to arrive.
Apparently the earlier session was delayed hence affecting the timing for this tour.
We registered, got changed into a snow-proof overall, complete with thick woolen socks and boots,
and we were then driven up a rough terrain which turned from
a rocky landscape to a snow-covered one.
We eventually reached a mountain station where a dozen or more snowmobiles were parked. 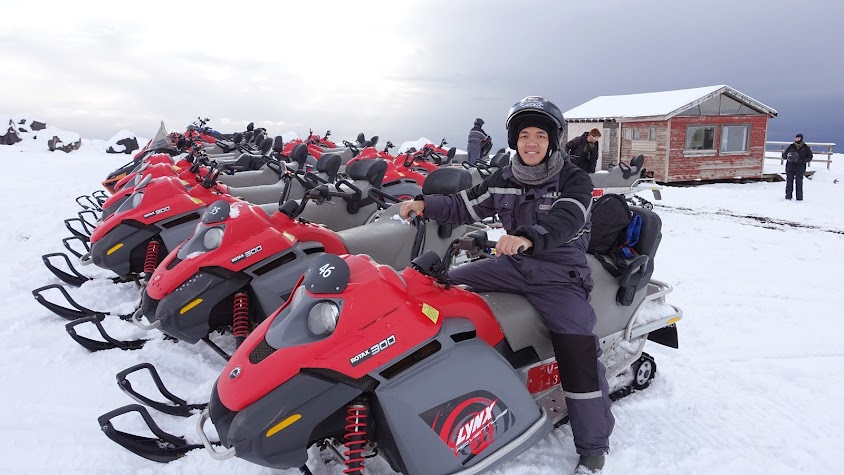 .
I have never rode a snowmobile before, hence it was really good fun for me.
Initially cautious and careful about the controls for the vehicle,
I quickly got used to it. I would not say that it was the most easy thing to drive;
due to the curves formed by the undulating layers of snow,
if one was not careful, the center of gravity would be unbalanced and topple the snowmobile
over together with the rider and the pillion. 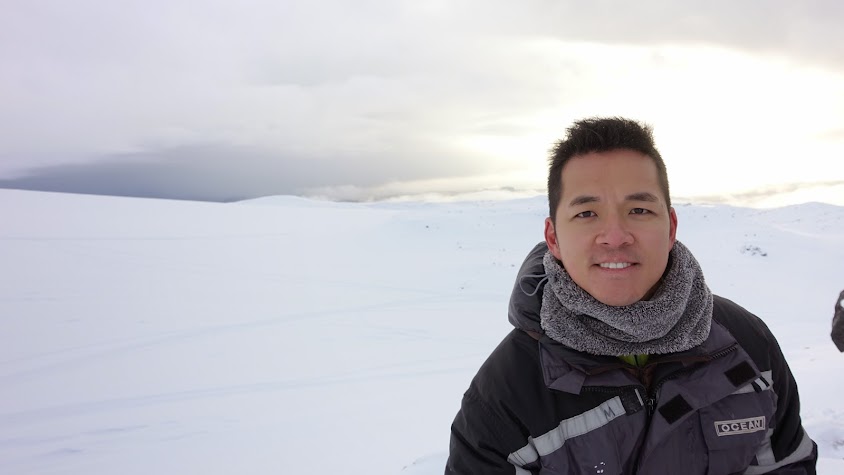 .
After half an hour of adventurous snowmobiling, we arrived at the peak of the glacier.
Stopping by to take some lovely photos of the scene, the bunch of we snapped away
furiously, and then we were on our way back. Nothing beats driving up to a Snowy peak on
one's ability. Definitely a recommended leg for the trip! 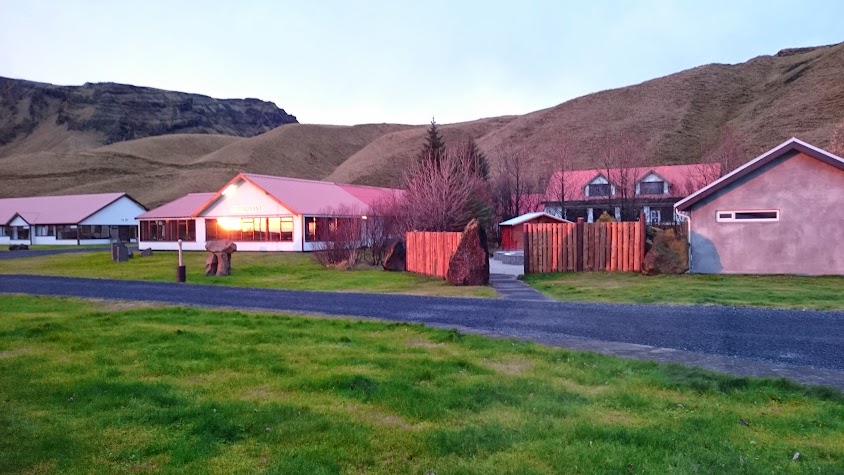 .
> located near the small Village of Vik, this was the southern-most part of the Icelandic leg.
> Katla had an outdoor hot tub which we had to try, of course.
> Spacious rooms, though a little old fashioned.
> fantastic WiFi access from room
> also caught the first glimpse of the Aurora borealis but as we were headed for dinner, we
did not snap any photos
Tags: travel
Subscribe