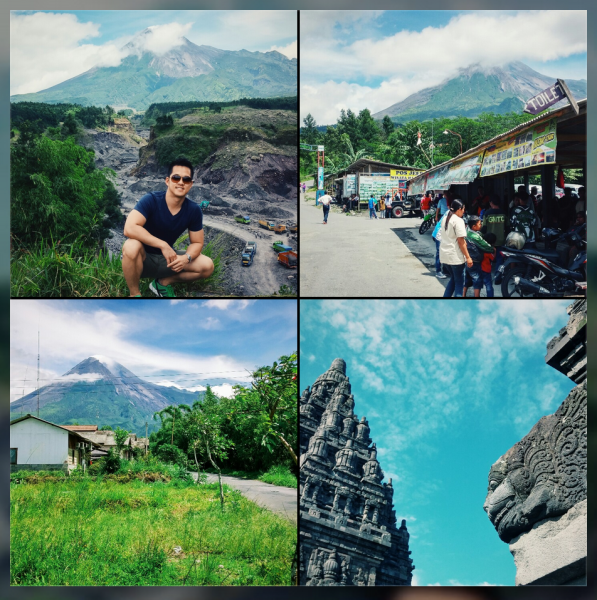 Going for a jeep trip to Mount Merapi sounded like the thing that I'd like to do. Erupting last in October 2010, Merapi sat in the horizon, like a giant time-bomb of a mountain, especially from the lobby of the hotel. I could see Borobudur a few kilometres away, rising from the dense foliage, and then, far away in the background, the grand stature of Merapi.

Thus a day trip to Mount Merapi and then to Prambana Temple sounded like a good outing. We woke up earlier for a slow breakfast of Nasi Goreng, fresh fruits, and jasmine tea, and then made our way to the hotel lobby. This time, our guide was not Noordin but Jamal, a tanned and humorous local guide looking smug in his yellow "National Tourism Association" polo.

Jamal was very chatty, and in the drive to Mount Merapi, our conversations revolved around "salak" or snake fruit, clove and clove cigarettes "kretek", why there are not many Indians in Indonesia (apparently in the 1950s, Sukarno ordered all foreigners, with the exception of Chinese and Middle-eastern races married to locals, to leave Indonesia), the upcoming elections, migration policy to encourage locals to move to Kalimantan, and of course, Merapi.

Upon arriving at the "base camp", Jamal looked for the tour operator in charge of the jeep tours. Grinata Adventures was fully booked, and we had to wait for 9 jeeps before our turn came. No matter, as it gave us the opportunity to walk around and enjoy the cool weather, as well as to admire the volcano.

The jeep ride was a bumpy adventure along small trails and tracks, passing by numerous quarry sites. The locals are licensed to remove the volcano soil and ash for sale. According to Jamal, a truck of ash can be sold for 1 million IDR. We eventually arrived at a makeshift Merapi "museum", which was originally the home of a village family before it was damaged by the volcanic rocks. Placed on display was a collection of melted paraphernalia, such as crockery, timepieces, toys, and indistinguishable objects. It gave a sense of what used to be there, which was there no more. As we drove past the empty roofless houses which succumbed to the anger of Merapi, I was once again reminded by my trip to the desolate ChristChurch city centre two years back.

From Merapi, we had a delicious lunch at Ayam Goreng Suharti, and then made our way to Prambanan......