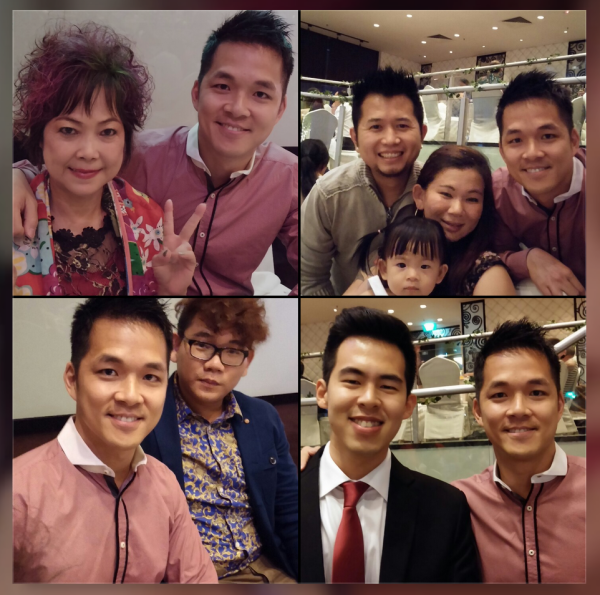 1st January happened to be my cousin Alvin's wedding. As I was supposed to be one of his brothers, I was roused from my slumber rather early - at 520am to be exact. I did a quick wash up and then rushed over to Hougang, where the brothers were supposed to assemble at 6am. Brenden was there already when I arrived. I helped Alvin prepare the red packets, and at slightly past 7am, we made our way in a convoy over to Espirina at Buangkok, where the bride Michelle was waiting.

It was then a series of games involving white vinegar, balloons, bitter-gourd, and the vilest things that one could imbibe especially on the first day of the new year. We managed to clear the various stations, and then eventually stormed into the bride's house while the sisters lost a few seconds of focus. The rest was up to the bridegroom as he edged his way into the bride's chambers.

The wedding event took up the entire day, and since I was the emcee for the evening, I had to head to the hotel function room early to prepare and rehearse. It turned out to be a nice gathering of sorts -- especially when it has become rare for the relatives to gather, especially after my grandma passed away two decades ago. Hence, I took the opportunity to connect with the various aunties, uncles as well as cousins. In the past, a wedding function was more like a chore; where I had to "show face" and then quickly leave when the last course (desserts) were served. Now that I am already in my thirties, I am more aware of the 'passage of time', that things never really remain in situ, and that time will pass, and people will age, and move beyond this lifetime, the moments that we gather to connect become more significant.

Another deep-seated thing at the back of my mind throughout the day, was the fact that my big aunt (my cousin's mother) moved on last year. I would have imagined that she would have wanted to attend this important event of her son, and hence in her absence, each and every one in the family would chip in to make the wedding event a big success, and thanks to everyone's effort, I would say it was a resounding success. Just before the commencement of the wedding banquet, I rallied everyone to take a big group photo, and perhaps that to me was a symbol of our blood ties - that even we do not meet often enough, we are still one big family.
Tags: wedding, writing
Subscribe