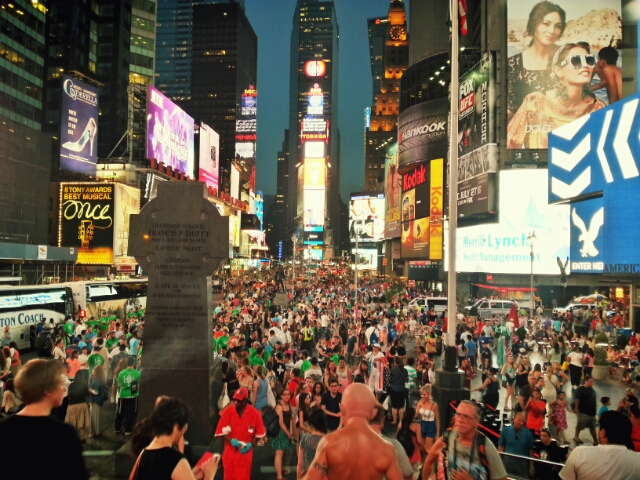 My impression of New York was formed by the music, the television and the movies.
To me, the Big Apple was a "concrete jungle where dreams are made of,"
a city that never sleeps, with Broadway and its many musicals.
I recall Sarah Jessica Parker in her pink dress.
And there's King Kong and the Empire State Building.
It's amazing how popular culture can shape our perception of this amazing city.
On the other hand, I think about Wall Street and the band of financial institutions that rule the world,
throughout the bulls and the bears of the stock market and NYSE.
New York was truly a multi faceted megalopolis.
On a more somber note, I also think about Ground Zero,
and how this city represents the hopes and dreams of a nation founded on democracy and freedom.

Yet, while I did enjoy myself in this vibrant city despite the oppressive summer heat,
Somehow New York City did not enchant me the way that London did.
This was something that I felt unconsciously, and after returning to Singapore
I did a poll with my friends and colleagues, and so far every single one of them preferred
the city of London over the city of New York. What could be the reason?
Some opined that London was closer to Europe, and hence could be an ideal
Gateway to the rest of Europe. Others felt that the royal lineage and the tradition
That was encompassed with it gave London a competitive advantage and lead over
New York. For me, I found New York to be vibrant - but perhaps, too vibrant?
There was so much, and too much going on, that I found it hard to catch my breath.
Nevertheless, if I would have more time, hopefully not in Summer but in Spring or Fall,
To amble down the busy sidewalks and Central Park, my experience would be a more
Balanced one. Having said that, I had a great time, not only in New York city, but
Also in Boston and Buffalo, and I look forward to my next big trip!