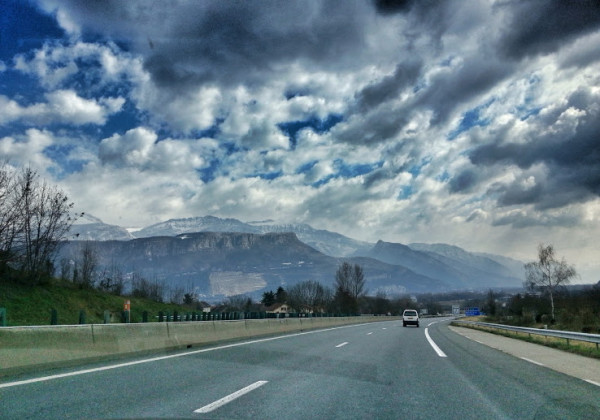 "We shall not cease from exploration,
and the end of all our exploring
will be to arrive where we started
and know the place for the first time."

Took this shot as I travelled from Lyon to Grenoble, France
For work. Grenoble is a city in southeastern France, at the foot of the
French Alps, near the river Isere. The proximity of the mountains has led to
Grenoble being known in France as the "Capital of the Alps". The sheer size and
Majesty of the mountains was overwhelming, and despite the city centre feeling like a
Small town that could be covered within an hour or two, the city definitely had its own charms
Not unlike that of any other European city. As the weather was cold, about 3-5 degrees,
I took a light lunch at the usual Al Fresco sideway cafes, away from the cold shadows and
Instead in the bright auspices of the warm comforting sunlight. And while most would have
Preferred a hot coffee or tea, I joined the locals in ordering the beautifully coloured red
Belgium beer. Unfortunately, the warm comfort did not last long - the sun quickly disappeared
Into the clouds, and some light snow fell from the skies, and as the diners hurriedly scurried
Into the protection of the cafe, I asked for the bill and decided to make my way.