Gregory Crewdson was commission by the New York Times Magazine in 2002,
To make a set of images, titled "Dream House", which depicted surreal suburban scenes.
Crewdson, an artist known for his highly cinematic and theatrical photographs, had the idea of
Doing a series of pictures all made in and around one particular house in Rutland, Vermont,
That was kept exactly the same as it had always been, even though it had been unoccupied
For a number of years. Several Hollywood names were enlisted for this initiative, such as
Julianne Moore, Gwyneth Paltrow, Tilda Swinton, Philip Seymour Hoffman, Dylan Baker,
To play the roles in the pictures. The pictures tell stories of shame, discomfort,
And convey the idea of something foreboding that is about to happen. Hence,
"Accessible" (as in a suburban setting) but yet "Inaccessible" (there is something beneath...) 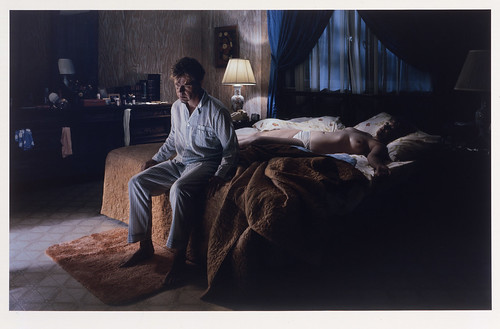