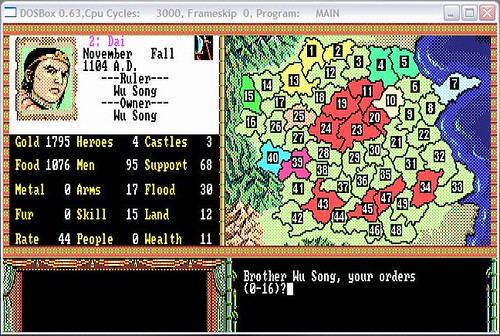 Gosh I can't believe
Seventeen years later
I'm stuck on it once again.

Bandit Kings of Ancient China is a turn-based strategy video game published by KOEI in the 1980s for the Nintendo Entertainment System, MS-DOS, Amiga and the Macintosh. It revolves around recruiting and managing heroes and armies, and capturing and developing territories, called 'prefectures.'

The game is set in 13th century China, close to 1000 years after the events chronicled in Koei's better-known Romance of the Three Kingdoms, the weak royal court of the Song Dynasty inspired the rise of legendary bandits who proclaimed themselves the bandit kings. This game is based on the epic Chinese tale, the Water Margin, and can be described as a more difficult RTK, because although the setting and gameplay remain similar, you start out in exile and must fight many stronger opponents. Personnel management and resource allocation, therefore, become much more important here, especially when you can only perform one move a month! Perhaps the easier aspect in comparison to RTK is that in order to win the game, you need only to kill Gao Qiu and do not need to conquer every prefecture in China.
Subscribe
Previous
← Ctrl ← Alt
Next
Ctrl → Alt →
Previous
← Ctrl ← Alt
Next
Ctrl → Alt →