For the W.B.D. Games we expected third party acquaintainces
As well as curious people steaming from a storey below.
We would have preferred if they introduced themselves but
Ultimately if everyone had fun at the party we are truly happy.

The party evolved because

into_the_wild won some silly radio contest and promised to plough the $$$$$$ back to his friends.
The party started at 2230hrs and ended at 0400hrs because Mr. M needed to clean up the place.
All liquor donations went back to the crowd.
28 bottle of Absolut and 8 bottles of wine were emptied.
We were pleased to have a celebrity bartender.

hotdoggie coordinated the party and planned it only ten days.

thatkodomo designed the poster; it was recycled from an old S.E.A. Games poster.
If you study the poster carefully you'll realise there's a DANCING sport; it was edited.

chrisloup were the official sports photographers.
Most worn brand: ADIDAS.
The youngest guest will turn 3 next January; he's

into_the_wild's godson.
The oldest guest is 50 and enjoyed the music very much.
The guest that travelled the furthest for the party was Pele.
He happened to be the best dressed guest as well. 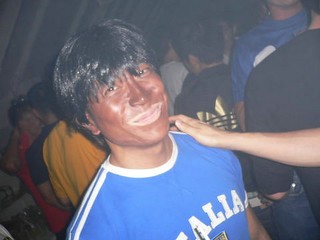 We were a little disheartened when

hotdoggie lost his phone
Which he left on the deejay console, and tainted the overall positivity of the party.
But I guess we won't let this bring us down.

Once again, thanks to everyone for making this party a successful one.
Thank you for your pressies, your liquor, and most importantly, your presence.
It would not have been possible without everyone's efforts. 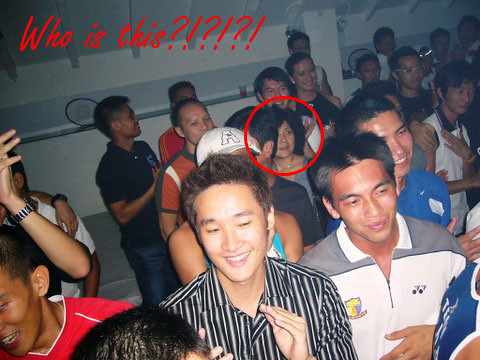 But who is this lady appearing at the party?
We are intrigued.
Anyone?