:: A Matter of Perspectives :: 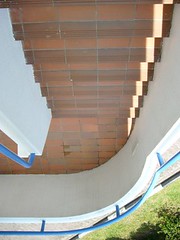 Let's say you are running a race.
If someone takes over you,
Will you put in the extra effort to keep up
Or even overtake him.
Will you just ignore him and
Continue at a steady pace?

Due to the irregular working hours of late
I decided that it was more convenient for me to
Visit the gym at Bedok Clubfit rather than the usual Planet.
At the gym, I immediately noticed the difference.
The kind of gymmers there were different from those of Planet's.
They were younger, as well as older.
They were less sociable; more focused on gymming.
I saw a teenage gymmer being coached by an elder.
And he was BIG for his age.
There was another teenage dude who was benchpressing
Like 80kg excluding the bar!
I stared, agape, for a while.
I could only lift 60kg, at my max.

It was a rude awakening for me.
(Or at least I chose to see it this way.)
Years of gymming has made me complacent
To the point that I may be stagnating and not know it.
There's work to be done. Need to push myself again.

But sometimes, seriously
It's hard to draw the line between
Enough
and
Not Enough
.