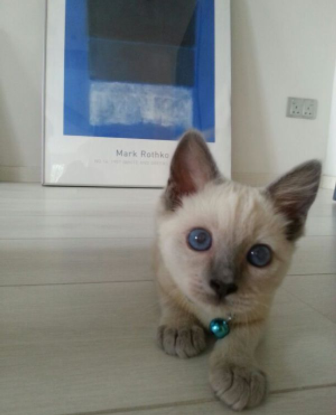 Franc Franc was born on 9 August 2012,
and shares the same birthday as Singapore.
We found him from an online private cattery that specializes in
breeding British Shorthair as well as Ragdolls.
The topic of getting a cat, I think, started earlier this year,
when we visited a friend for dinner.
He had 2 cats; one was a Persian,
and I have to confess that I cannot remember the breed of
the other one as the cat was hiding away most of the time
- apparently shy with strangers.
That brought me to the strange and interesting feline world
while I was previously a more canine predisposed,
having had in my lifetime, 3 dogs:
a mixed Silky Terrier from when I was age 8 to 16,
hen a Jack Russell Terrier from when I was age 25 to 26,
nd then a Shar Pei, from when I was age 31 to 32.

The idea of having a cat into the family hence took root
in the earlier months of 2012,
but having had pets before, I understood the time and commitment
which could be exacting on the owners.
The thought of having an adorable puppy or kitten prancing around affectionately
is usually  what resonates BEFORE getting one.
But in reality what happens AFTER the purchase or adoption of a pet,
is the horror of having pee and poo all over the house; on the carpet, couch, or bed.
Torn curtains and paintings, and destroyed bits of furniture.
Barking and Mewing throughout the night.
And the likelihood of having the house in an eternal fur-storm.
There will be fur everywhere, especially on the working black pants that we will wear to work.
Hence I cautioned about getting one into the household.
"Who would be the one to walk the dog?" I asked?
A healthy dog requires at least two walks - once in the morning and once in the evenings.
Will we have the time to make it happen?
This turned out to be a critical decision in switching over to a cat from a dog.
A cat (at least) requires no walks, and if trained well,
would take care of its needs in the litter box.
Still, no decision was made, the aspirations were shelved for a while more.

Approaching August, Wendy told me that she was getting a dog.
She has been looking to adopt a puppy for a while already - and after several interactions,
decided on this black-coated Puppy which she named Muji.
I remarked to Wendy that Muji would make a good addition to her new place in the East,
and volunteered to be Muji's "Godpa".
And in jest, I exclaimed that the next pet that I would get would be named "Franc Franc",
to complement Muji and in the silly accolade to the furniture concept stores that we have come to know.

And hence, the story of Franc Franc.
With the proclivity towards getting a cat,
I started to read up more about the various cat breeds and their personalities.
I was not drawn to the cool and independent natures of the feline creatures,
and wanted a cat that was "more like a dog". After browsing through several cat columns,
I arrived at the conclusion that a Ragdoll could be the breed that I was looking for.
A Ragdoll is a docile breed, and extremely friendly to humans and even strangers,
apparently sheds very little fur, and easy to handle.
I watched YouTube videos depicting Ragdoll cats that did doggie tricks such as
"Paw", "Sit" and they could even be leashed!
Our minds were made up.

It was not easy to find a Ragdoll breeder,
and we came across several scam breeders earlier in the year,
who would post the most lovely photographs of Ragdoll kittens on the online classifieds,
but demanded us to wire payment over to them before they proceeded to "deliver" the kitties.
After realizing that they were based in the Cayman Islands,
we took a step back, and then cat hunt stopped yet again, in the middle of this year.
I suppose then, Wendy's Muji reignited the parenthood in me,
and, one thing led to another,
and we eventually found and visited a bona fide cattery
and made payment for Franc Franc.

The breeder charged a hefty sum for the ragdoll kittens,
which we felt was way out of our budgets.
"However, if you are not looking for a show breed, then I may have the right one for you,"
the breeder quipped, and showed us this tiny and frail kitten with a broken tail.
That did not bother us, and we chose Franc Franc.
That was in September 2012.
As Franc Franc was still very young and needed to be with his mother,
we had to leave him in the care of his mother, and made occasional visits to the breeder.
Eventually he was ready for collection in late October.
Eager and excited, we prepared him for his journey southwards
to the home for the rest of his life.

The initial few weeks was a period of adjustment,
as Franc Franc was still trying to get used to the new environment.
In fact, it was an adjustment for us as much as it was for him.
The house was not designed to be cat-friendly,
and we did not have a backyard to put the litter box.
Hence, after some considerations,
the litter box was put in the bathroom,
so that Franc Franc could trot around while no one was at home.
And the glass sliding door offered visibility between the owner and the cat.
Franc Franc slept much during the initial weeks as well, as a kitten would do.
He was also suffering from the usual illnesses that affected kittens -
fungal infections and well as worms,
and hence he was not growing as well as he should be,
and sported a bloated stomach.
After a few trips to the vet, he eventually got better.
And boy did he grow!
From a teeny weeny kitten that could fit into my palm,
he is now 1.5kg and slightly longer then the length of the laptop
that I am typing on right now.
He has a better sense of the spatial aspects of the house -
his territory, and has moved from the
2D aspects (just the floor) to 3D
(jumping and climbing onto bed frames, couches, TV console and the like).

Franc Franc started to creep behind the TV console,
where the wires and cables were,
and we had to repeatedly pull him out of it,
for fear that he will chew through the cables,
or even worse, electrocute himself.
He chewed up my mouse literally,
and now I can only use a wireless mouse for my laptop.
As cats are nocturnal creatures, he will end up sleeping more during the day,
but less at night, and as you could imagine
I found myself waking up at 6am in the morning
from his usual daily catexercises.

So what has changed from this experience?
For me, personally, I noticed something, definitely.
This could jolly well be a universal observation:
like how having a kid in the family shifts a family's focus
from each other to that of the children.
Franc Franc definitely became the centre of attention for the family,
and in a whimsical way created new directed energies within the household.
He is everyone's attention, both in good and bad ways.
Also, caring for Franc Franc evoked the paternal instinct from myself,
(and I truly believe it comes with age as well),
that the greatest joy we get comes from caring for
someone else rather than ourselves.
So it has been only less than two months in the household,
and Franc Franc just turned 4 months-old yesterday,
but Franc Franc will be a permanent fixture and the latest addition to the family,
and I look forward to great adventures ahead, together.
Collapse